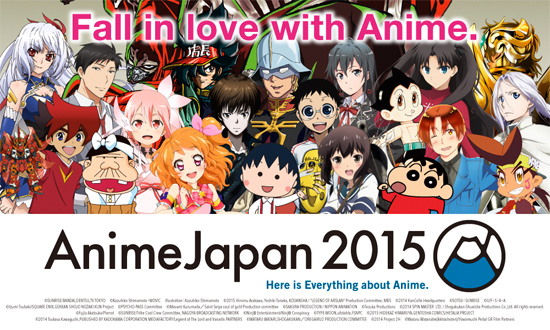 This past weekend Tokyo hosted AnimeJapan, the second annual event that combined the Tokyo International Anime Fair and the Anime Contents Expo into one massive convention for both industry types and regular fans. With around 120,000 attendees, it’s one of the biggest anime gatherings in the world, and suffice it to say there was no shortage of anime news out of the event. Here’s a roundup of our favorite announcements and videos.

First off, Fairy Tail. Aside from having a booth at AnimeJapan with some pretty sweet cosplay, a video preview for the upcoming Tartarus Arc was also shown and posted online.

Another beloved anime, Jojo’s Bizarre Adventure, also showed off its next arc, which starts in April, at the event, along with a life-size stand (no touching!).

Finally, rounding out the list of known properties, a new promo video for Yowamushi Pedal. No surprise here: lots of pedaling and yelling.

Moving onto new anime, we’ve got the pretty perverted-lookin’ A Boring World Where the Concept of “Dirty Jokes” Does Not Exist, also known as Shimoseka. We recommend refraining from watching this one at work.

Animation studio Madhouse was also at AnimeJapan, showing off the first promotional video for their new series Overlord about a big skeletal wizard living in the remains of a shuttered MMORPG world.

Based on a light novel, Overlord will have a screenplay by Sword Art Online’s Yukie Sugawara.

For all the foodies out there, definitely worth a look is the trailer for Shougeki no Soma, aka Food Wars!. The anime, based on the manga released in the States by Viz, is being animated over at J.C. Staff and is directed by Yoshitomo Yonetani (GaoGaiGar).

Winding down our roundup, fans of Kill la Kill will be pleased to learn director Hiroyuki Imaishi and the gang over at Studio Trigger will be animating a short anime for 30-minute Ultra Super Anime Time block that premieres this July. No other details yet, but keep your eyes peeled!

Okay, dude, you ask, but what did AnimeJapan look like? For a boatload of photos of the event, we recommend heading over to Crunchyroll, ANN and Anime Anime.