After 20 Years of Anticipation, Berserk Returns to TV as Anime 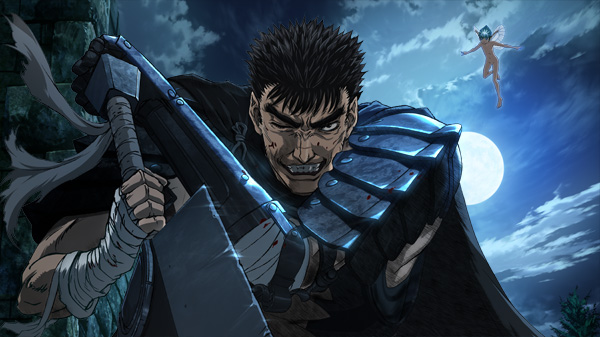 For literally over half my life I’ve been waiting on Berserk. When I first saw the original anime TV series in the late 1990s, years before the English-language editions of the manga commenced, I watched each episode waiting to see when the extended flashback that commenced at the end of Episode 1 would conclude, not initially realizing that the entire series was meant to be an origin story for “The Black Swordsman.”

When a trilogy of theatrical Berserk movies was announced after over a decade of waiting, I rejoiced … until I realized that they were just going to retell the same “Golden Age” story arc as the first television series did. Four years later, in 2016, it has finally happened: a sequel anime that goes beyond the prologue! But after nearly 20 years of anticipation, is it possible for this production to stand a chance of meeting fan expectations? Could anything? 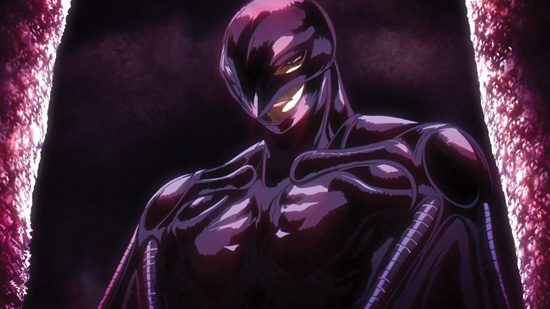 For 27 years, author Kentaro Miura has written and drawn Berserk, a grim tale about a savage musclebound warrior known only as “Guts” who wields a massive blade on his quest for revenge. Like an ultraviolent medieval fantasy version of series such as Fist of the North Star or Violence Jack, the world Guts inhabits is rife with every atrocity against mankind you can think of and then some. Two years after having witnessed and survived the massacre of all his fellow brethren in the Band of the Hawk by demonic forces as previously retold by the film trilogy, Guts is now outfitted with a new arsenal that includes his trademark massive sword and a prosthetic arm that gives literal meaning to the term “hand cannon.”

As the “Black Swordsman,” Guts now travels the lands with a vengeance in search of the one responsible: his former best friend Griffith who has been reborn as Femto, the fifth member of the demonic Godhand. So commences the 2016 television series, which picks up from where the films left off. Finally, the remaining cast of Berserk will be animated and voiced beyond video games! While I personally preferred when Guts didn’t have a Dungeons & Dragons party consisting mostly of kids, this is what everybody has been waiting for, and with the series not only being simulcast on its website but also released on Blu-ray and DVD by Crunchyroll, everybody should have no trouble seeing it unfold. Well, what isn’t blacked out or otherwise not drawn to meet television broadcast standards, anyway; for a series with as much graphic violence and sexual content as Berserk, you may want to get those home video versions once available! 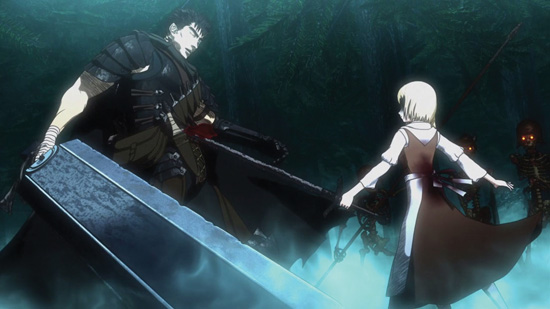 By all rights, this should be the most anticipated anime of the year, but two factors have caused mixed feelings among fans. First and foremost: the animation itself. The 2016 Berserk series employs the same highly polarizing animation technique as the film trilogy of a few years ago, in which scenes that require significant amounts of either camera or character motion are animated using cel-shaded 3D CG models while the remaining scenes are done in 2D. The 2D cuts look fantastic, though I must point out that the opening credits as well as the early episode flashbacks of the television broadcast draw Casca without her darker skin tone! (She looks as she should once we’re reintroduced to her in the present, so perhaps it’s just a side effect of the flashback visual filter.)

The issue is the 3D CG animation, which despite efforts doesn’t quite match up against the 2D designs. Let’s be real here: the real-time graphics of the Berserk video games manage to move with a greater sense of weight and smoothness than these prerendered 3D visuals … and I was originally pointing that out with regard to the Playstation 2 and Dreamcast games even before the brand new Playstation 4 title! 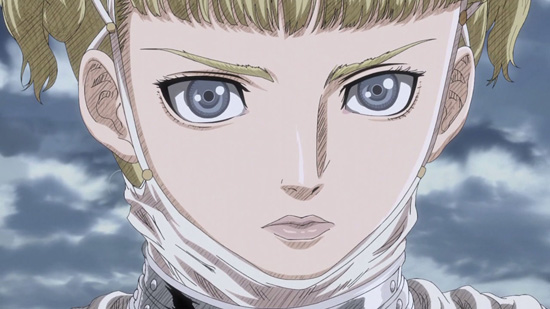 What drives such a baffling stylistic decision? At Anime Expo 2016 where the first episodes of Berserk premiered, this was the first question fans wanted answers to. Key staff noted a desire to try something new that would showcase the strengths of both 2D and 3D animation. I say that’s either bull or they missed the mark. The reality is there’s a major reason it took so long for new Berserk anime to be made: Kentaro Miura’s artwork is so insanely intricate that animation studios wouldn’t be able to do it justice in motion given the time, money, and personnel constraints in which modern television anime is produced.

In defense of modern anime, Miura’s manga releases take longer and longer, and the hybrid animation technique looks better in motion than still images suggest, but whether you mind it or not—as a Golgo 13 fan, I have an affinity for goofy-looking skeletons—you WILL notice it. The animation studio handling the production, LIDEN FILMS, most recently worked on the new Initial D films, so perhaps debatable 2D and 3D visual integration is its calling card? 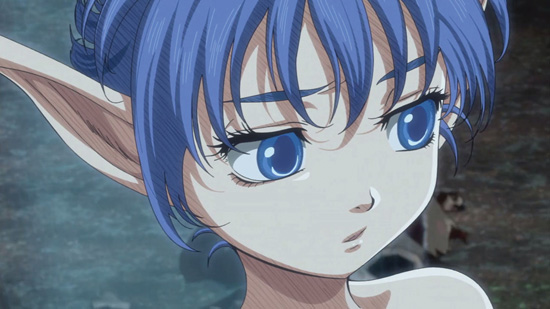 Another reason for the divided reception is the new series is not a 100% direct adaptation of the manga. For the sake of getting to the good parts, namely the Tower of Conviction and everything to do with Inquisitor Mozgus, the anime elected to skip some minor side excursions and have the relevant storyline information conveyed via flashbacks. Much of Episode 3 is anime-original content with a new minor Apostle for Guts to face off against, but before you cry “filler!” the storyline and character design came from Kentaro Miura himself. As a longtime Berserk fan I am entirely in favor of this decision, and if you’d never read the manga then you’d never know anything was “missing” in the first place.

No matter what, Berserk just isn’t for everybody. It’s brutal and sexually exploitative to a level that would give many Game of Thrones fans pause, and little indication is given that this is in fact a continuation of a previously existing storyline, which you’d better have seen first. Do I wish they’d just stuck to the 2D animation and that composer Susumu Hirasawa contributed more to the soundtrack? Sure. But despite its age, the material remains so compelling that it joins Jojo’s Bizarre Adventure: Diamond Is Unbreakable and the live-action Taiwanese puppet series Thunderbolt Fantasy on my list of must-watch simulcast titles every Friday. I sincerely hope they animate additional arcs afterward, and if they decide to truncate that whole boat excursion to one single episode or less, you won’t hear any complaints from me! 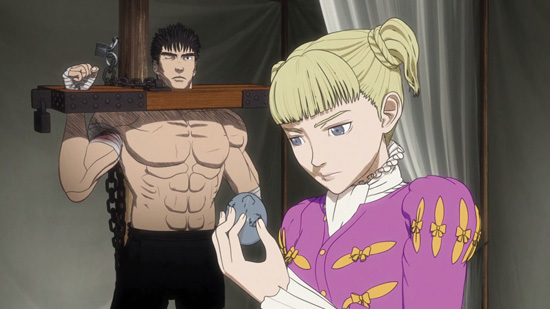 Berserk is available from Crunchyroll.