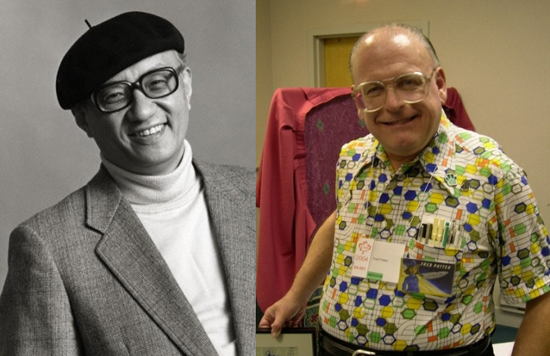 Osamu Tezuka and Fred Patten once conspired to make you “watch cartoons in a language you can’t understand””.

As even casual observers of paradox and head-scratching conundrums know all too well, the life of a time traveler can get complicated fast. Just a few days ago, I began the “2010 is 1980” project here at the Otaku USA website, and already the events of those three decades ago are loudly beating on my door, hijacking attempts to sleep, anything to try and show me the past from a different perspective…or maybe it’s all in my mind?!?!?

To be fair, I’d kind of asked for it. Yesterday morning, I pulled one of my all-time favorite books related to anime and manga off the shelf: Fred Patten’s “Watching Anime, Reading Manga: 25 Years of Essays and Reviews”.  Later that same evening, I would randomly bump into Peter Goodman, the owner of Stone Bridge Press, and the editor of “Watching Anime, Reading Manga” at a party. I personally thanked him for publishing Fred’s book, which is a wide-ranging collection of just-the-facts reportage that traces a clear picture of how anime fandom, and what I like to call “THE INDUSTRY”, developed. 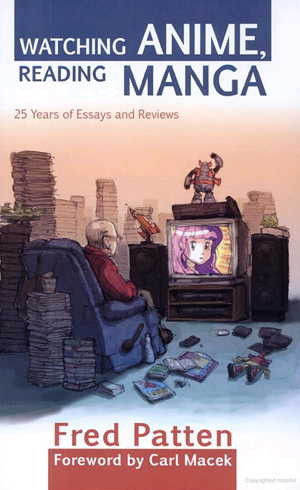 Still one of the most devastating book covers ever published.

I once interviewed Fred—who is now retired from the writing game—for my 2006 book “Otaku in USA”. After reading the piece, my Japanese editor decided to bill Fred as “The World’s Oldest Living Otaku”. And why not? After all, Fred Patten had been active in fandom since the early sixties, even before many *Japanese* otaku had been born!

By day, Fred was a librarian at the Hughes Aircraft Company’s Technical Document Center, a gig that lasted until the end of the Cold War in 1990. But in his off-hours, he wrote about comics and animation for a handful of ‘zines. Leafing through his nearly 400-page book, which spans 1979 to 2004, it seemed that 1980 was a big year for Fred Patten, pioneering anime journalist. February ‘80 marked his debut as professional writer after years of toil in the amateur press. Issue 4 of Fangoria magazine (you read that correctly) contained Fred’s article “Dawn of the Warrior Robots: The Beginning of a New Breed of Action Hero!” which introduced US readers to likes of Mazinger Z, Getta Robo, and other Super Robots of the era (Can you even imagine Fangoria magazine running a piece on anime today!?!?).

Fred’s early efforts at promoting anime to overseas audiences did not go unnoticed in Japan. From 1978 to 1981, he was tapped by Toei Doga and Tokyo Movie Shinsha to help test-market their productions at American SF and comic conventions. And not all the feedback was positive. Fred told me, “One convention in the early 1980s listed the anime room in its program book as ‘the Fred Patten conspiracy to make you watch cartoons in a language you can’t understand.’”

But Fred had some pretty major conspirators in his corner, starting with the “God of Manga” himself, Osamu Tezuka. After briefly meeting each other in 1977, Tezuka would come to rely on Fred and the small circle of fans that he belonged to (the LA branch of the Cartoon/Fantasy Organization, AKA the C/FO) to show him around the SoCal area, and supply information about the burgeoning popularity of anime and manga outside of Japan. Says Patten in his book, “(Tezuka) was bewildered but flattered that so many Americans, who did not understand the Japanese language, had taken the trouble to figure out the plots of his manga from the pictures alone.” 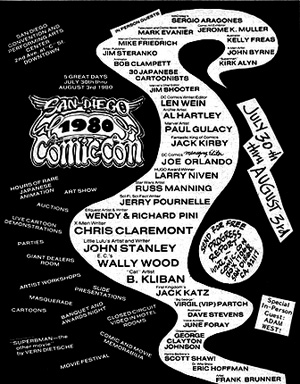 1980 Comic Con line-up, maybe the only time “30 Japanese Cartoonists” would get higher billing than Jack Kirby.

The grand event was, according to Fred when, “Tezuka had convinced numerous Japanese cartoonists such as Go Nagai, Monkey Punch, and Yumiko Igarashi that they ought to come to the 1980 San Diego Comic Con to see for themselves that they had so many fans.” Fred and his buddy Robin Leyden were asked to act as liaisons to thirty visiting Japanese guests in all. And as Tezuka’s 1980 film Phoenix 2772 was screened to a rapturous response at Comic Con, it seemed like some sort of breakthrough (like the sort Variety had recently predicted) between the Japanese anime industry and US audiences could—or should—soon follow suit. But as Fred writes in his book, “Contact between American fans and the Japanese animation industry faded after 1981 when it failed to lead to any significant commercial results.”

And so, it was back to the drawing board for Osamu Tezuka and co. Meanwhile, Fred would become a player behind the scenes at US distributor Streamline Pictures, helping to bring the likes of Hayao Miyazaki’s The Castle of Cagliostro and The Professional: Golgo 13 to our shores. He would also continue to write about anime and manga for a number of publications.

In “Watching Anime, Reading Manga: 25 Years of Essays and Reviews”, Fred looks back on the class of 1980 and notes without a smidgen of hyperbole or understatement, “The influence on the fledgling anime fans of having met some of the most popular Japanese cartoonists, and the concept that fans were performing an important cultural service by helping to introduce Japanese animation to Americans, had a significant effect for years.”