Exploring history’s mysteries in the first in a trilogy of Eureka Seven: Hi-Evolution films. 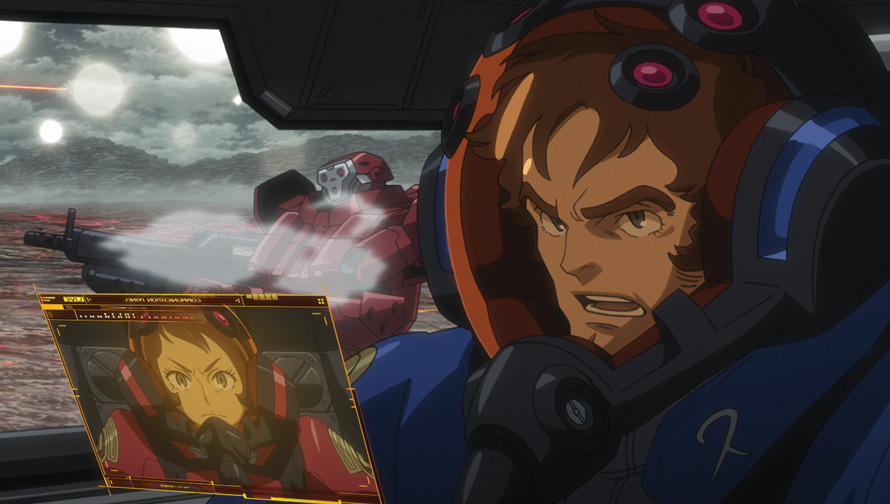 Eureka Seven never bloomed into a mecha franchise to rival cultural mainstays like its inspirations Gundam, Macross, and Evangelion. Early reception suggested it certainly had the potential: while it was a mess, it remained at all times throughout its 50-episode run an impassioned mess that charmed viewers with its flair for visual wonders and supple character writing. The legendary Shoji Kawamori’s decision to combine lanky mecha designs with an aerial surfing motif was a stroke of genius that sold the series’ infectiously freewheeling and juvenile spirit even better than Naoki Sato’s house, techno, and surf-rock-inspired soundtrack; Dai Sato’s scripts faltered when building world or conflict but finely traced a tangle of relationships between its deeply human cast members that sold their pains, their fears, their triumphs, and their loves as simultaneously the stuff of domestic joys and celestial wonder. There was, at the heart of it all, an undeniable magic Bandai clearly hoped it could safely exploit for decades to come.

Yet no matter how many spinoff manga series or video games or anime sequels Bandai churned out, nothing came close to capturing the spirit that made Renton, Eureka, and their Gekkostate family’s adventures so compelling. A followup movie, Pocketful of Rainbows, teased something between a sequel to and inventive retelling of the original only to offer instead a flawed combination of clip-show and ludicrous what-if scenarios cobbled together from reused assets that churned up only confusion in its trappar-colored wake. Sequel series Astral Ocean did it one worse, as writer Sho Aikawa seemed hell-bent on contradicting or undermining every thematic element Sato had taken such pains to weave together in the original; less a deconstruction than a total demolition, it presented so vicious a dismantling of the original story’s soaring romanticism and optimistic conclusion that one wondered if Aikawa held a grudge against Sato. Or, perhaps, against the series as a whole. 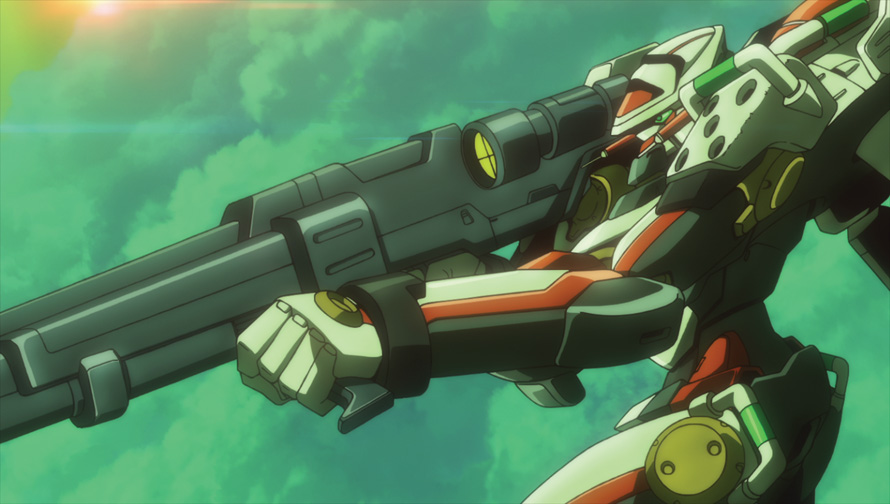 Children of the Evolution

The first installment of the new Eureka Seven: Hi-Evolution film trilogy, by contrast, promises with its ambitious title that it is not so much interested in deconstructing the original or veering off to explore entirely new ground so much as push a series gone stale forward by subjecting its key elements to radical transformation. But its promise is an empty one, a lie almost immediately put to pay by returning director Tomoki Kyoda and new director Hisatoshi Shimizu’s decision to spend the film’s very first act chronicling the monumental “Summer of Love” that was so often alluded to in the original series and which turned Renton’s father Adroc into a legend. It’s a gorgeous set-piece, to be sure: the talents behind Eureka Seven have always had an eye for color design and kinetic movement, skills here put to brilliant use conveying the total frenzy of this apocalyptic battle and the global scale of destruction. There’s little use denying the joy of watching as brothers Holland and Dewey dodge and dart through waves of anti-body Coralians in their twin Devil Fish suits or the sheer sense of spectacle that comes from writhing and massive mechanical crimson ribbons spilling out from the heart of a gargantuan, pulsing metal lotus to envelop the world. Nor is it easy to write off our first chance to see Adroc not as merely a larger than life presence hanging over half of the cast but as a flawed man, given to self-doubt and self-recrimination but also to ruthless (if necessary) murder and to loudly declaiming Holland’s catchphrase: “Don’t ask for it. Go out and get it.”

But all the sound and fury in the world can’t disguise that this opening section is an incredibly misguided narrative choice. It’s not enough that it’s awash in aural and visual noise with undifferentiated sounds booming from all channels at all times and an endless series of subtitles stamped over the action to better explain the fine points of battalion deployment and troop positions. Nor is the nonsensical decision to open this story in the middle of what is functionally the climax of an earlier story we’ll never rightly see the most heinous directorial decision on display. No, the largest problem is that in deciding to open this new series on the Summer of Love it once again pegs the events of this supposed evolution to those of the original series in a way that ensures they will remain impossible to escape. 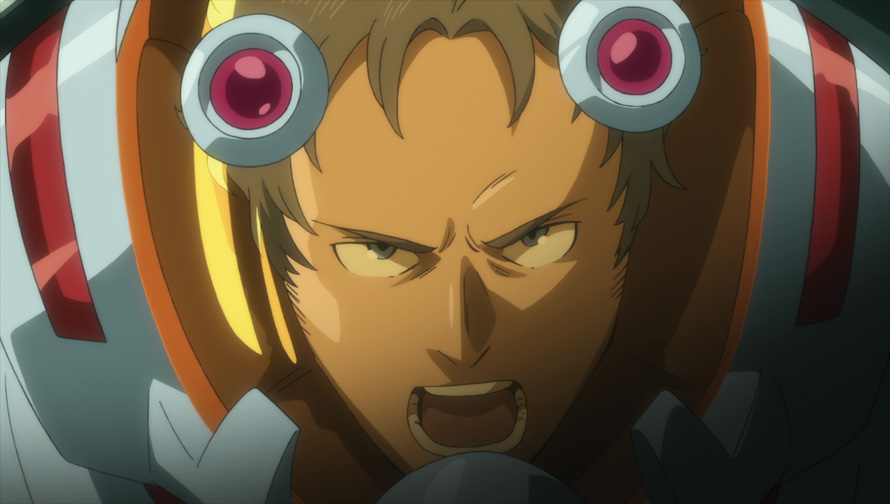 Certainly this is not for lack of trying: while the bulk of the movie chooses to retell the arc of the original series that found Renton living with Ray and Charles Beams, it presents something impossible to describe as a simple recap. Some of the original series’ most major players are omitted entirely: no mention at all is made of either Axel or Diane Thurston, characters instrumental not only to Renton’s development, but to that of Holland and Talho, as well. Eureka’s “children” are entirely absent. Others are relegated to a status so cursory it seems like little more than fanservice. Not one member of the Gekkostate beyond Holland and Talho are allowed more than a line; Dewey is afforded no role beyond the opening scene. Even fan-favorite yandere Anemone appears here only in an advertisement plastered on the side of a bus and in a preview of the next movie that suggests she’s no longer Dewey’s pet project but the head of a group of KLF-piloting idols. Changes in dialogue similarly suggest that this is not the story we know: it’s revealed early that Ray and Charles are aware from the second they meet Renton that he is Adroc’s son (a set of subtitles even suggests that they adopted him after they married but were never able—or never bothered—to find him). That Holland is not fixated on Eureka because he’s desperate for glory and importance but because it’s simply his job. There is a definite sense that Kyoda looked to the Rebuild of Evangelion movies for inspiration on how to construct and present his own revamp.

Yet if Kyoda was truly interested in moving beyond the shape of his original work—in evolution—it seems baffling that he would choose to take the same tack he did with Pocketful of Rainbows and rely so much on reused assets to tell a new version of an old story. For as sleek and shiny and novel as the opening scene is, the rest of Hi-Evolution is told entirely through shots lifted almost unaltered from the 2005 series. Worse, so much of the story presented here resembles the original so closely and is so clumsily presented that one would be forgiven for missing most of the larger changes: Renton still flees the Gekkostate only after a botched attempt to heal a terminally ill Eureka leads him into a fiery fight with Holland; Renton still meets the Beams, only after falling asleep in a park that turns into an afternoon rave; Renton is still, in the end, forced to choose between assisting the Beams in their attack on the Gekkostate in rescuing Eureka from the only family that has ever welcomed him with warmth. Scene after scene is lifted directly from the original with so little attempt to touch up the visuals to match the new dialogue that upon my first viewing I had to wonder if I wasn’t simply misremembering the events of Eureka Seven. 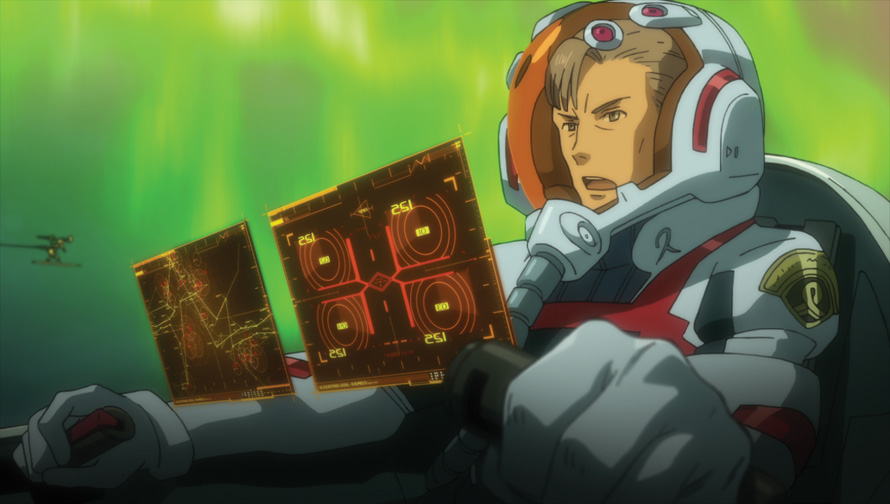 The clumsy editing does nothing to offset this confusion. For rather than starting from the beginning, this tale jumps backward and forward and forward and backward in time without any attention to narrative flow or to emotional structure. In the span of five minutes one witnesses a flashback to Renton’s first meeting with Eureka, then a flashforward to a nondescript day aboard the Beams’ ship, then a flashback to Renton’s botched attempt to save Eureka, then another flashback to their first meeting, and then a flashforward to a fight with Holland. Too little is shown of Renton’s time on the Gekkostate or with Eureka in more casual moments to understand their relationship let alone develop one of our own with them, while what is shown is arranged with so little purpose that viewers seem expected to connect only through their memories of an original series that here has been mangled into something paradoxically familiar and yet alien. The result is a confused and confusing creation, something uncertain of what it wants to do and so uncertain of how to be at all.

If this opening entry of Eureka Seven: Hi-Evolution is set on morphing the series into something new, why then begin by showing an event so instrumental to the mythos of Eureka Seven as the Summer of Love rather than disembarking from an entirely new premise? Or, if it is interested in exploring the events before the series, why does it then immediately turn to tell us a mangled version of events we’re familiar with but can now only be disoriented by? If it’s so fascinated with evolution, why rely so much on the goodwill of the audience to carry its emotional weight? The disappointing truth is that those behind this reboot seem to have no interest in any such directions. Rediscovering the sense of wonder that made the original Eureka Seven so worthy an addition to the history of mecha anime would not be easy, no; it would require not simply repackaging familiar scenes with a new coat but instead finding a new direction every bit as novel and strange and interesting as the first; it would require recapturing the spirit more than simply reselling us the same old images. But then, Bandai, Kyoda, Shimizu, and Sato seem less concerned with telling a heartfelt tale than with wringing out the last few dollars they can from this tired series with minimal effort. It’s a shame to think that the magic inherent in Eureka Seven may have vanished to parts unknown at the conclusion of the original series just as its young lovebird protagonists did, but it’s a fear this most cynical addition to the franchise looks to bear out.

The first film in the Eureka Seven: Hi-Evolution series made its theatrical debut from Funimation in February 2018.