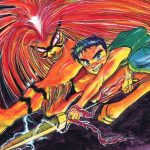 This seems like the week for big news from manga creators. From word about Naruto creator Masashi Kishimoto’s new serialization to some teasing from Fairy Tail‘s Hiro Mashima, there’s a lot going on in the industry! There’s also something coming from Ushio and Tora author Kazuhiro Fujita, who has a “super important announcement” in store for this year’s 15th issue of Shogakukan’s Weekly Shonen Sunday magazine.

The issue hits stands in Japan on March 14, and the teaser announcement says, “Again in 2018, Kazuhiro Fujita will shock you!!!”

Fujita’s current serialized series, Souboutei Kowasubeshi (Souboutei must be destroyed), has been running since March 2016 and is currently about to hit its 8th volume. The series will be featured on the next Shonen Sunday issue’s cover and will also have opening color pages inside.