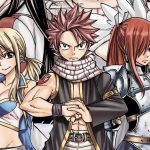 Fairy Tail may be over, but much like Naruto‘s Masashi Kishimoto, series creator Hiro Mashima has been hard at work. According to his latest update, he should be able to reveal a few things this April.

Mashima previously teased his new serialization in April. He followed that up with hints that it will be “a new form of fantasy,” “jokes will be quite a challenge,” and “Plue will make an appearance.”