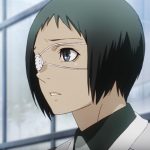 Cö shu Nie’s “asphyxia” was previously announced as the opening theme for the Tokyo Ghoul:re anime, and now you can sample some of the indie rock trio’s work in the latest promo.

Series creator Sui Ishida personally chose Cö shu Nie for the OP, and even named the theme song. Check out the new 80-second preview ahead of the TV anime’s April 3 premiere below.