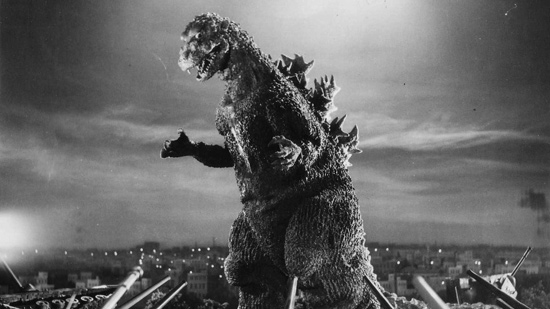 Godzilla saw his first cinematic outing in a decade earlier this year with the release of the Gareth Edwards-helmed Godzilla, but in Japan, he’s been in cinematic slumber since 2004’s Godzilla: Final Wars.

That’s set to change, with the announcement from Godzilla studio Toho of a new Japan-produced Godzilla film to be released in 2016.

The decision to make a new film was largely motivated by the success of the Hollywood version, says Hollywood Reporter.

The film made more than $500 million and did well in Japan, starting in first place its opening weekend.

According to a Toho staffer, Toho’s licensing agreement with Legendary Pictures, who produced this year’s American version, doesn’t preclude Toho from making their own G-flicks. Legendary are themselves producing a sequel to their version, but that’s not set to hit theaters until 2018.

This will be the 29th film in the series which began 50 years ago with the release of Gojira in 1954.

There are still a lot of question marks following this announcement – the director and cast have yet to be decided. There’s also the question of special effects. Hollywood Reporter says while Toho can’t compete with Hollywood budgets, “advances in CG will allow it to create a film that can stand alongside such productions.”

Those words are causing some trepidation among Godzilla fans who value the Japanese films’ practical effects – that is, the fact that Godzilla has always been performed by actors in suits.

In the Millennium series – Godzilla films made between 1999 and 2004 – some CG was used, perhaps most notably to render Zilla, a monster who looks suspiciously like the creature from the 1998 Hollywood Godzilla film, who’s defeated within seconds by the true, suit-based Godzilla.

Toho also made several other Godzilla-related announcements, including the formation of a “Godzilla Strategic Conference,” or Godzi-Con, made up of executives and directors who will look for ways to spread Godzilla throughout the world.

Toho also announced plans to build a 12-meter tall Godzilla head to adorn the top of a new movie theater it’s building in the Kabukicho area of Tokyo. The head, which is set to debut in April, will look down on moviegoers from 40 meters up as they enter the theater.

Thanks to the 50th anniversary of the franchise and the release of the Hollywood film, this year Godzilla popped up all around Tokyo, including in a park in Midtown and at an exhibition in Shibuya. 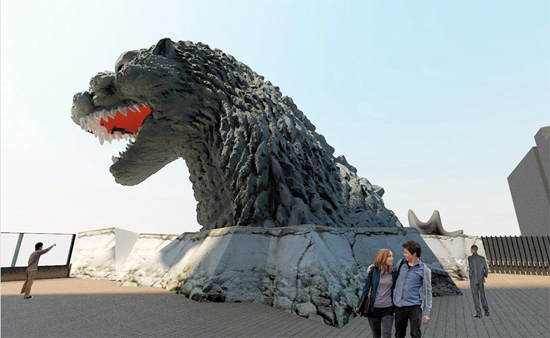 A rendering of the theater-top Godzilla and an oblivious couple.