There Are A Million Reasons To Get Into Golden Time 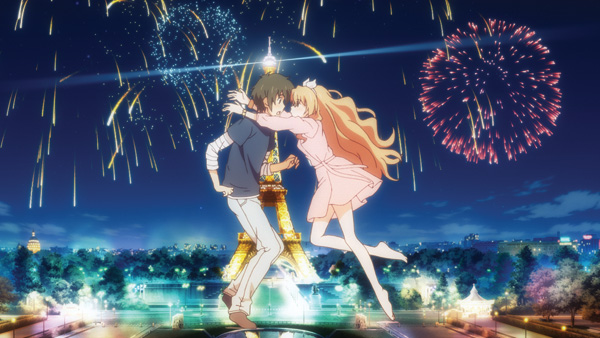 In an age of melodramatic romances and tsundere female characters, a relatable anime rom-com is hard to find. If the protagonist isn’t a complete tool, the several women he’s involved with are frustrating and needy, or it’s a never-ending parade of sexual jokes that fall flat as soon as the punchline ekes out of the unlikable protagonist’s mouth. When it comes to anime romance, it’s difficult to find a series that treats the subject of love and interpersonal relationships with respect.

Sentai Filmworks’ Golden Time is one such show, combining drama, comedy, romance, and zany antics to weave a tale that’s one of the most realistic attempts at deconstructing love we’ve ever seen within the genre. It’s simultaneously heartbreaking and invigorating at the same time, and one of the strangest roller coaster rides romance fans will ever have the pleasure of taking. Whether you’re Team Koko or Team Linda, there are a million reasons to get into Golden Time. 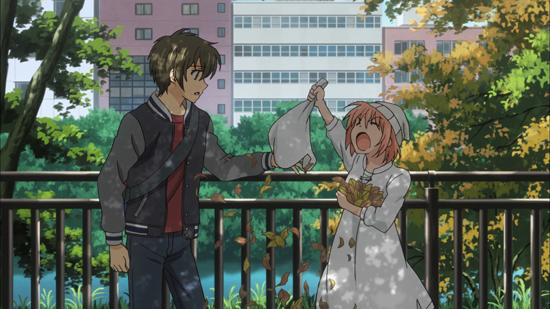 Love Is in the Air

Tada Banri is your average freshman law student at a prestigious Tokyo university. On his very first day, he finds himself late to the entrance ceremony because he has no idea how to get to the university. Smooth, right? After creepily following a couple of students, he meets up with one Mitsuo Yanagisawa, a freshman who attends the same school. They hit it off, and it seems like Banri’s first day at law school is going to be awesome … until a strange girl shows up, hands Mitsuo a beautiful rose bouquet, then smacks him with them.

She walks off in a huff. Who is this girl and what did Mitsuo do? It turns out she’s Koko Kaga, Mitsuo’s childhood friend and fiancee by arranged marriage, who followed Mitsuo all the way to law school to be with him again. It’s already a hectic day as it is, but the fun doesn’t stop there. Banri meets up with a gorgeous second-year Japanese Festival Culture Research Club member who we later find out that Banri has a secret past with. 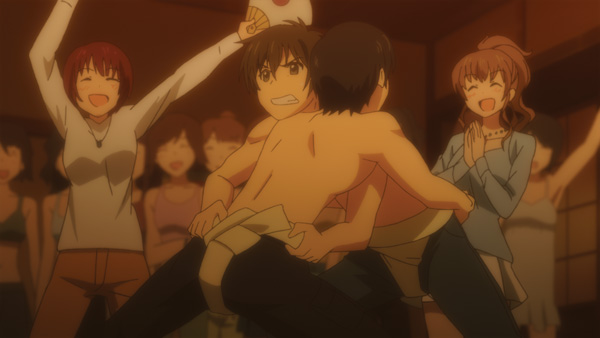 What we later learn is that Tada Banri is actually an amnesiac, having lost his memories in a tragic accident back during his high school days. This leads to an entirely frustrating love triangle between Banri, Koko, and senpai Linda from the Festival Club, as well as others who find themselves caught in a crossfire of young love. It’s messy, dirty, and sometimes beautiful, but it’s always satisfying. And that’s what makes Golden Time such a memorable tour-de-force.

It helps that our players aren’t just cookie-cutter romantics or even banal anime characters. Banri may be a hapless fool, but Koko truly steals the spotlight as a maniacal, obsessive stalker-like woman who acts as though she simply can’t be happy with being alone. She clings to whomever she happens to be around at the time, even if their relationship is toxic. 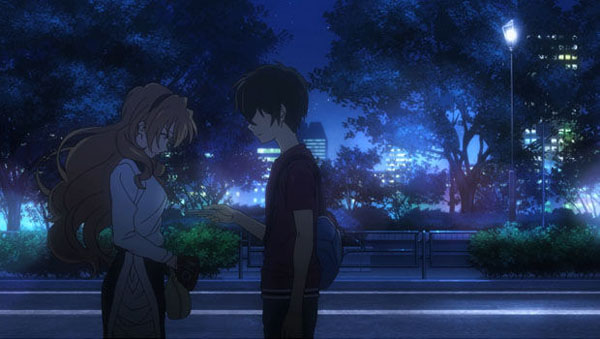 For example, she cultivates a relationship with Banri despite harboring remaining feelings for Mitsuo, who she only rebuffs in an effort to regain his “love,” which was never there to begin with. As the series wears on, she only gets worse, and while she begins to learn about what a meaningful relationship actually is, it’s hard for her to rectify her many personality faults without blaming others, becoming extremely hurtful and jealous, or wrecking the many healthy bonds she works so hard to build over the course of the series.

On the other hand, senpai Linda is seemingly dealt the worst hand out of everyone as she is forced to watch someone she so obviously cares about and harbors feelings for from the sidelines. As the viewer, do you root for Linda as a remnant of Banri’s past from before he lost his memories or do you look for Banri to live a fulfilling and nuanced life with the girl he finds himself currently dating? Failing Linda or Koko, what about Banri’s friends and acquaintances? And what of the girl who watches quietly from the sidelines, the smile rarely disappearing from her face? In a show like Golden Time, much like Kimi ga Nozomu Eien or School Days before it, it’s tough to discern who the clear-cut “winners” or “losers” are, or who you should empathize with. It quickly becomes clear after watching the first half of the series that there may never be a happy ending for the majority of the characters on the show, let alone its main protagonists. 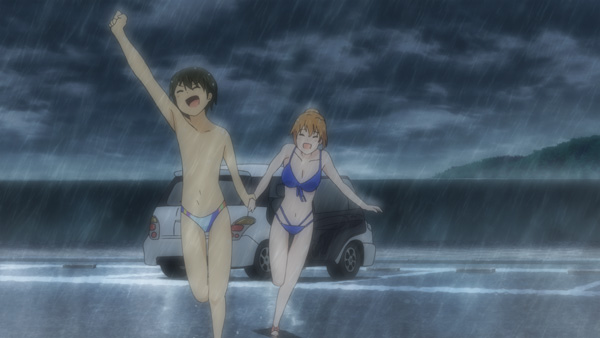 It’s refreshing as well to see supporting characters that aren’t slighted as far as character development goes, with those who would normally be viewed as “afterthoughts” fully fleshed out, given likes and dislikes, clear-cut personality flaws, and reasons to view them as real people rather than cardboard cut-outs or facsimiles of real humans. This lends a personable affectation to Golden Time that you just don’t see anywhere else. It’s one of the reasons it’s so easy to let yourself become lost within the narrative.

Golden Time is more than just its cast and their interpersonal relationships. The show also touches upon reality and how life can get in the way of our plans. One of the very first episodes about taking a trip to the beach shows just how frustrating it can be when you can’t sync up with your friends’ schedules. It painstakingly details the long car ride to the beach, the feeling of gloom and foreboding after plans seem to have fallen through, and the sky is clouding up andgetting ready to rain. 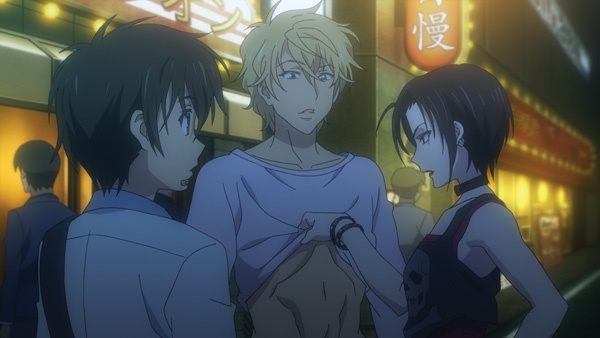 It spares no details when weaving the story, even making jokes about the air conditioning in the car and the banter that occurs between friends on a road trip. The decidedly less upbeat moments later on in that episode are integral to the story, and the build-up to get there is key. It certainly wouldn’t be the same show without its attention to detail and refusal to conform to anime tropes that end up wrecking similar endeavors.

This isn’t a show where romance is idealized or even shown to be anything other than heartbreaking and painful at times, and the fact that it isn’t afraid to paint its core cast in a negative light at times simply to further the story is fantastic. You will cry, you’ll get angry, and you’ll curse Banri, Koko, or the rest of the cast for being so stupid, but you know you’ll also do that with even those you love in real life. That’s a classic earmark of a great show, and Golden Time knocks it out of the park. 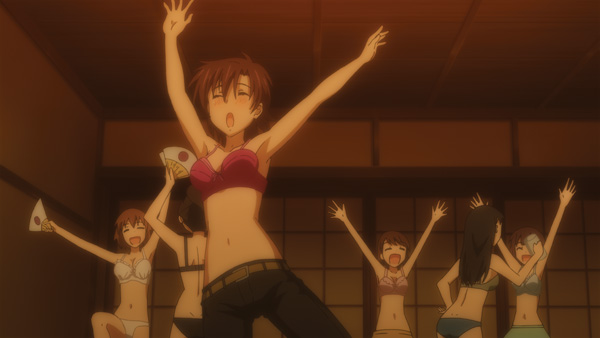 If you enjoy dramas where’s there’s not such a neat wrap-up for everyone involved or need a hefty dose of realism in your anime series, Golden Time should sate your hunger for a more adult, satisfying slice of life/romantic comedy that proves you don’t have to oversaturate your series with sex jokes or unfunny slapstick to create a memorable show.

Just don’t be surprised if, by the end of its 26-episode run, you can’t decide who’s best for Banri and what would be the “optimal” ending for everyone. I can guarantee you’ll be disappointed in that respect, but you’ll have had such an awesome ride that it probably won’t matter. Golden Time is available via Sentai Filmworks, but you’ll have to provide the tissues and angst that you’ll need after your first viewing. Trust me, it’ll be worth it.