The Vault of Error: Spriggan

The used anime section is a cultural wasteland.

Younger anime fans may not remember the days when anime on American home video didn’t generally come in full-season or half-season chunks. In the late Nineties and early Aughts, a typical twenty-six episode television series would run over six, seven, sometimes even eight individual DVD volumes, trickled out over a period of months or years, each DVD retailing at thirty bucks a pop. At the time this was the best business model to squeeze every penny out of a property. It’s also the reason that any given MovieStop will have three copies of Gasaraki Volume 4, one random volume of the Patlabor TV series, twenty seven unloved copies of The Animatrix, and at least two copies of Spriggan.

Oh, Spriggan. Why did I wait so long to add you to my Vault of Error? Why did I never buy you when you were shiny and new back in 2001, when ADV Films was the implacable juggernaut poised to dominate the American anime market? Was it because I secretly knew that I could invariably find you, twelve years later, neglected and forlorn, on a shelf next to equally forsaken copies of Happy Lesson and Popotan? Or was it because I found your very premise goofy? 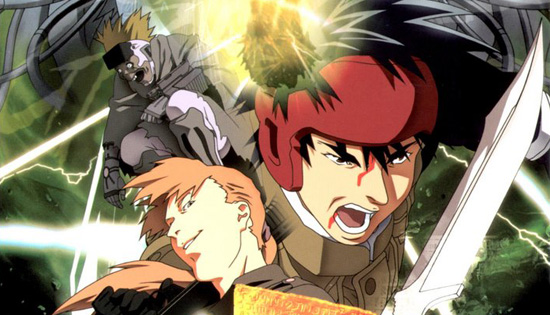 Either excuse is equally likely. But as surely as the market for physical media continues to contract and streaming media continues to erode the old ways of doing things, and as surely as enthusiasts of my generation must feel like they are caught between the Charybdis that is damaged physical media and the Scylla that is spotty Internet connections and vanishing content, so it was that when I saw a DVD of the film during a spur of the moment trip to a brick-and-mortar store, I knew the time had come to make my peace with Spriggan.

This anime is ridiculous:

Did you know that scientists have discovered the ruins of Noah’s Ark on Mount Ararat? And that the Pentagon is desperate to possess this discovery, such that they’ve deployed teams of cyborg commandos armed with chain guns and monofilament wire to seize the dig site and capture the scientists? And did you know that there’s a secret organization known as ARCAM—probably an oblique reference to the fictitious town of Arkham in H.P. Lovecraft’s tales of weird cosmic horror—that strives to make sure archeological finds of this nature remain obscure, because there are some things humankind was simply not meant to know? 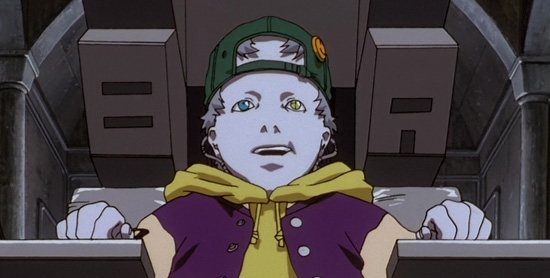 Also, did you know that Noah’s Ark is really a gigantic atmospheric control engine / genetic manipulation crockpot that doubles as a spacecraft in the shape of an Ocean sunfish, and that it clearly wasn’t built by human hands?

Can you guess who built it?

I’m not going to say it was aliens.

(But it was aliens.) 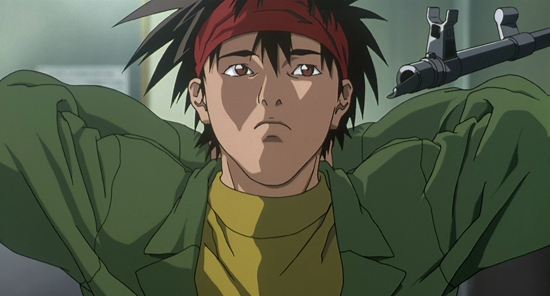 Into this heady mix of Indiana Jones by way of Ghost in the Shell, we throw our cocky protagonist, Yu Ominae, a seventeen-year-old high school student who moonlights as a Spriggan, one of ARCAM’s elite secret agents. Yu has fabulous hair, very little personality, and a Tragic Past™, so naturally he’s the hero of this tale, rather than the cooler, more capable, voiced-by-Takehito-Koyasu character, Jean Jacque Monde. But what Yu lacks in motivation he more than makes up for in hilarious violence, as he dons an orihalcum-impregnated “muscle suit” that enhances his already superhuman athletic ability thirtyfold. Then he proceeds to punch the bad guys into next Tuesday. 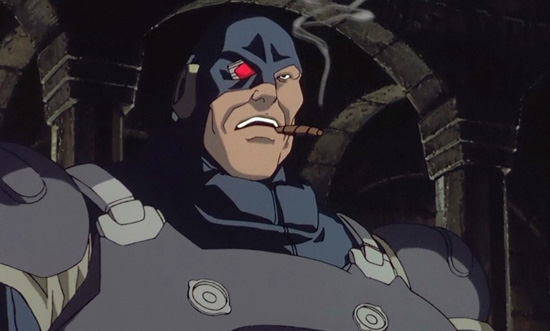 It’s the action that makes Spriggan a great viewing experience. One moment our hero is engaged in melee combat with the aptly named Major Fat Man, the next he’s back-flipping behind a shipping crate and emerging on the other side piloting a Jeep and firing an anti-materiel rifle at the same time. It all whirls along at a breakneck pace. Although the set pieces are brief, they pack enough awesome into the fight sequences to keep even a jaded viewer like me watching. It’s easy to see where the animators, overseen by none other than Katsuhiro Otomo, poured most of their effort; this film reads like a treatise on military fetishism, with every real-life weapon, armored carrier, and aircraft reproduced in loving detail. The illustrators also deserve credit for capturing the rugged beauty of the Turkish countryside. Who knows? If director Hirotsugu Kawasaki had spent a little more time developing the characters and the conflict, Spriggan could have been another Akira. As it stands, it’s more of a Steam Boy, only with cyberpunk trappings rather than steampunk ones. 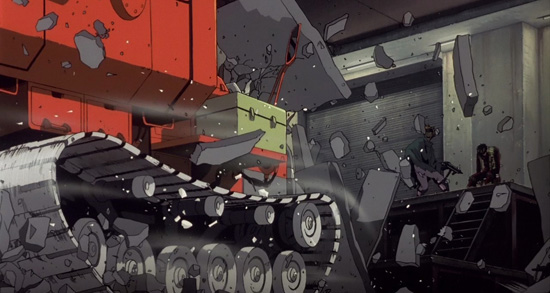 Loud, brash, and treating its ridiculous subject matter without the slightest hint of irony, Spriggan is a pop culture atavism, a throwback to a simpler time when Japan’s bubble economy encouraged investors to throw money at just about anything to see if it would stick. Sometimes we got Cosmos Pink Shock. Sometimes we got Spriggan. But as weird and goofy as these properties may have been, they were anything but dull, safe, or ordinary. Alas, most of these quirky, animated gems—if they ever saw a U.S. home video release in the first place—have since been passed over, left behind, forgotten, and relegated to the $5.99 bin of history.

We could all use a little more Spriggan in our lives, and I could use a few more big, dumb action movies in my Vault of Error.

Miss Muromi on the Beach Preview Comes Up for Air
Dragon Ball Z: Battle of Gods Goes Even Bigger on IMAX