The Vault of Error – Char’s Counterattack

One does not care to acknowledge the mistakes of one’s youth.

I admit it. I cosplayed once, back in the days when all you needed to pretend to be your favorite anime character was some felt and a little fabric glue and more enthusiasm than talent. I dressed up as Char Aznable from Mobile Suit Gundam: Char’s Counterattack, and I swear by everything sacred if any pictures of me in that raggedy suit ever hit the Internet, I’m going to set my PC on fire. But those were more innocent days, a time when all you needed to be an anime fan was a VCR and a seventh generation copy of Char’s Counterattack with borderless white subtitles by an unscrupulous cabal of fansubbers known as E. Monsoon.

That was over fourteen years ago, when I was naive and inexperienced, and the second anime film I’d ever seen was a massively important entry in one of the world’s longest running anime franchises, which I consumed blithely with little context and even less comprehension. I didn’t know who these people were or why they were trying to drop an asteroid on Earth. I just knew that this was the coolest damn thing I’d ever seen, what with the robots and the rocket ships and all the laser sword battles in space. Now I’m older and wiser and quite a bit more cynical, and my experience with Gundam isn’t limited to a single bootleg tape borrowed from an equally enthusiastic friend. And I can still say that, despite years of experience, Char’s Counterattack still doesn’t make a great deal of sense, but damn does it still look cool. 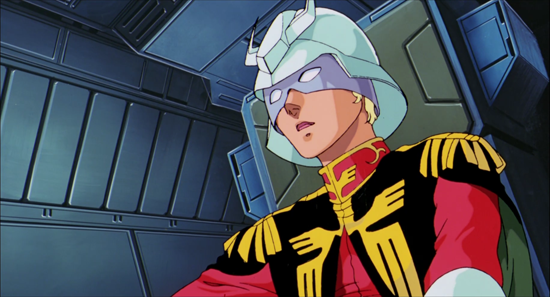 Although it was the first Gundam-related theatrical movie composed of entirely original animation, in many respects Char’s Counterattack is more of the same. Amuro Ray, the protagonist of the original Mobile Suit Gundam series, has grown from a surly teenager into a surly man.  Char Aznable, Amuro’s bitter rival and leader of Neo Zeon, is still running amok. Planet Earth still groans beneath the yoke of a corrupt and incompetent Federation government, and the space colonies are in open rebellion. Again.

This time around Char is purchasing asteroids and dropping them on Earth with the hopes of causing a nuclear winter that will force the survivors to migrate into outer space, where humankind can unlock its true potential. The film features lots of cool new mobile suit designs, from the Nu Gundam to the Sazabi, all accompanied by Yoshiyuki Tomino’s penchant for jargon. It also moves at a breakneck pace, barely giving the audience a chance to catch their breath before plunging them into the next intrigue, betrayal, or pitched space battle. And the conclusion of the film is just as ambiguous now as it was in 1988; Gundam fans have been arguing about the ending for nearly a quarter of a century.

This movie looks great, and it darn well better if it’s going to keep my attention, because the story itself can be fractured and unclear. But that’s okay with me. One of the things that attracted me to anime in the first place was its essential foreignness, its ability to weave a narrative that operated outside of what I traditionally encountered in Western animation. Like many other examples of Japanese theatrical animation from the Eighties, you could show Char’s Counterattack without subtitles—or even with the soundtrack muted—and the visuals alone would still be an engrossing experience. It’s a shame that Bandai Entertainment didn’t know what to do with the Gundam properties it released in America. 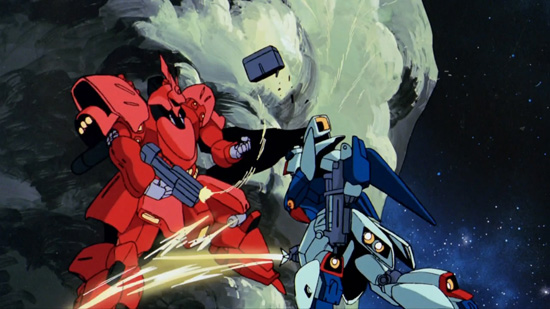 Char’s Counterattack was released on R1 DVD in 2002, two years before Mobile Suit Zeta Gundam, a television series whose events—along with the sequel series, ZZ—inform the plot of this film. There’s a missing chunk the size of two television series that fits snugly between the original movie trilogy (itself adapted from the original Mobile Suit Gundam TV series) and Char’s Counterattack. Whether this lack of context adversely affects the viewing experience is still a matter of debate even among the most ardent Gundam fans. Some cannot reconcile Char’s actions here, especially compared against his actions under an assumed identity in Zeta. Others (myself included) feel his present villainy is completely in line with his motivations in the movie trilogy. Most of the other arguments swirl around the new character, Quess Paraya, a teenage girl with Newtype potential and Daddy issues. Quess is one of the most universally reviled characters in the entire Gundam franchise. Are these inconsistencies an example of sloppy writing? Or are they merely typical of Yoshiyuki Tomino, a pop culture artist known for both his big ideas and his uneven executions? 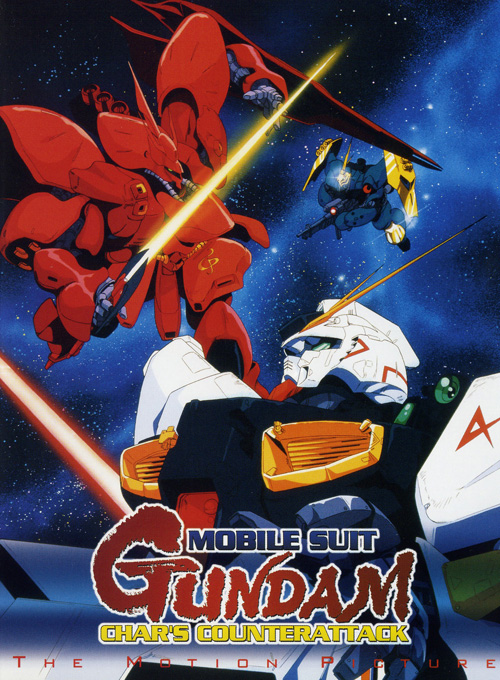 It’s all academic at this point, because now Bandai Entertainment is gone, obliterated, just another puff of space dust left behind in our journey through the Milky Way. Mobile Suit Gundam ZZ will likely never see any sort of commercial release on American home video. The latest release of Char’s Counterattack on R1 DVD occurred in 2007. At the time of this writing, the 2007 release can still be found on Amazon for a reasonable price, the same cannot be said for the earlier Special Edition.

One thing is certain: Char’s Counterattack is special. It marks a milestone in the history of one of the most influential science fiction cartoons to come from Japan, and it’s cool enough to have inspired the author of this article into engaging in some spectacularly ill-advised dress up. I acknowledge the mistakes of my youth, but owning a copy of Char’s Counterattack isn’t one of them.

On The Shelf – September 19, 2012
Gintama Anime Prepares for Return to TV