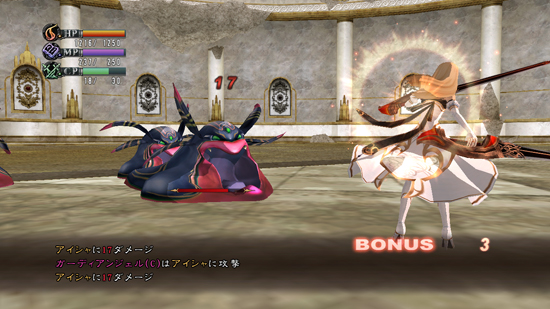 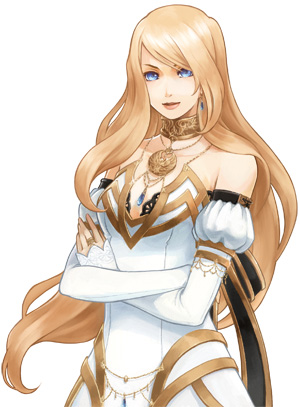 If there’s ever been a game with more half-baked ideas than Last Rebellion, I don’t want to know. It sounds cute on the surface. A single character RPG, persistent buffs that raise your stats to absurd levels, a combo system where every part of the monster must be targeted and systematically destroyed? Sure, why not? At least it’s not another game where you’re holding X through the random battles.

It’s not far in before you start to yearn for those grind-fests. The targeting order for body parts is different for every monster and almost never obvious. Then once you kill something you have to take another turn ‘sealing’ him or he’ll just come back from the dead. Comboing is especially onerous because you can macro the order of attack to one button. So once you discover a given monster’s killer-order every fight feels like a foregone conclusion. Layer on top of this a system of buffs whose usage destroy any sense of difficulty. CP, used to attack monster’s body parts, are supposed to be in relatively rare supply, lending a strategic bent to how much you use in a given turn. Good thing, then, that you find a spell three hours into the game that regenerates your CP to full or near full at the beginning of every turn. Now the stat is entirely irrelevant! The only actual difficulty comes from the rare boss that casts effects like ‘paralyze.’ In any other game it would be a joke, but here they cripple your single character, leaving you frustrated, watching a one-sided battle until the effect wears off.

The story is similarly forgettable, presented by weak drawings of talking heads and very little in the way of animated cutscenes. Devil-may-care Nine is forced to share a body with no-nonsense 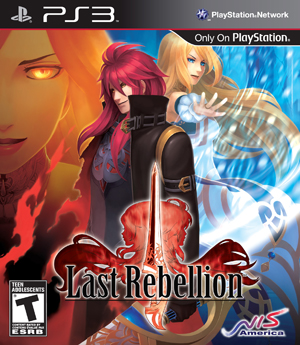 Aisha and GUESS WHAT: she just might know more than she’s letting on (gasp!) Then a bunch of stuff happens with characters you met once, then they disappeared for hours, and when they come back near the end you’re supposed to care about them.

Last Rebellion is inexplicable. Were it worse than it is it would be comprehensible, but in its resoundingly-average-in-every-way state, it actually ends up being more frustrating than the bad games. You could see how these game mechanics would excel somewhere else, but here everything they do is just on the bad side of average, more ballast on a sinking ship.