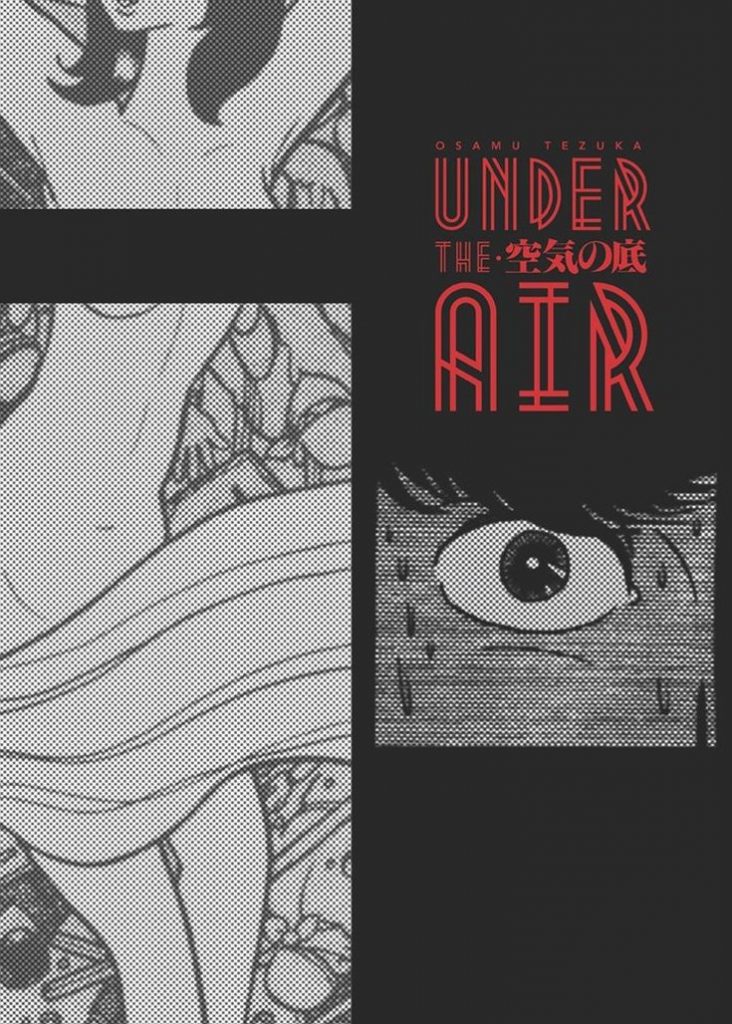 Under the Air is a collection of short works from the prolific Osamu Tezuka, known as the “God of Manga,” originally published in the 1960s and 1970s.

In his afterword Tezuka wrote that these short stories were “jumbled together” by the publisher and calls them “eclectic.” This is partly true, because the stories range from science fiction to historical to supernatural, but some constant Tezuka themes weave their ways in. The cruelty of humanity is shown, things are usually not what they first appear to be, and there are many appropriately ironic endings.

In the first story, “Joe’s Visitor,” a racist Southern white man fighting in the Vietnam War treats the African Americans around him with cruelty and derision, but only survives an accident because of organ transplants from a black soldier. He doesn’t use this as an opportunity to reflect on his cruelty, but becomes obsessed with hiding the evidence.

“Cliff of Death” shows a convict escape from prison and take some hostages, with surprising results.

“The Duel at Grand Mesa” takes place in the Wild West, where a man seeking revenge learns that not everything is as it initially seems.

“Cape Uroko” has Tezuka himself visiting the island Kishu and discovering that chemicals are being put into the water. While it starts out looking like a story about conservation and respecting nature (and it is), the ending is beyond this world.

“The Voice of Night” has a wealthy young man pretend to be homeless and fall in love, but the woman he falls in love with doesn’t know who he really is.

In “The Hole” a criminal saves a man’s life, and does not like all the attention he gets for it.

With “Chameleon” a man who will feign loyalties to get himself ahead in life becomes involved with experimental drugs that are supposed to make people and animals smarter.

In “The Cat’s Blood” a Tokyoite takes a rural woman who belongs to white cat god sect to the city. But her upbringing is still strong, and she acts more like a cat than a person sometimes.

“Valley of Bliss” is a science fiction story about space travel, where ignorance is bliss and reality is something entirely different.

“Illicit Love,” is, as the title suggests, a story of forbidden love, and what happens to a couple when their love is not accepted by society.

“Catastrophe in the Dark” follows a singer with a reason to feel guilty, and a seemingly supernatural response to what he did.

“Telephone” shows a young man picking up the phone only to be invited on a date by a random woman. He’s eager to meet here, but with a backdrop of student protests and some supernatural twists, he’s in for more than he bargained.

“Rovanna” is another story with Tezuka as the main character, and it’s even more out of this world than “Cape Uroko.” Tezuka visits a man he knew from college and gets conflicting stories on the very odd situation he finds in the man’s home.

“Lovers Under the Air” shows two guppies who are in love. After they reincarnate, they become people in a dystopian future.

Some of the work can feel dated, but at the same time, Tezuka is able to bring up so many universal human emotions. This collection shows how vast his imagination was, while simultaneously showing how human behaviors transcend time and place. Coming in at nearly 300 pages, this is one of Tezuka’s lesser-known but still powerful books.

osamu tezuka 58review 12under the air 1

Hideaki Anno and Shinji Higuchi’s Shin Ultraman Swoops in with First Teaser Trailer
Full Speed Ahead with the Mario Train!