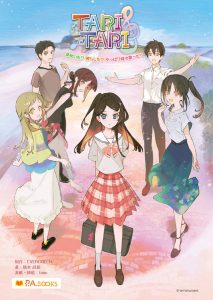 The 2012 series, which was animated at P.A. Works, will be getting a sequel set ten years after the original in digital novel format.

The digital novel will be available to Japanese readers August 1.

It used to be that the only way to read anime and manga-related novels was to learn Japanese, but recently companies like Yen Press and J-Novel Club have been translating more and more light novels into English. Tari Tari fans should poke those folks if they want to see this new book in English translation.

The original Tari Tari series ran from July to September 2012, and was directed by Masakazu Hashimoto. Here’s how Crunchyroll describes the series:

Too young to be adults, but no longer children…

Wakana Sakai was involved in music, but gave it up one day. Konatsu Miyamoto loves singing and can’t be torn from it. Sawa Okita would do anything for her closest friends. They laugh, they fight, they worry, they love… Through their very ordinary lives, little by little the girls learn to move forward. Sometimes they feel as if they can’t go on alone, but as long as they have their friends, they believe they’ll make it someday. Wakana, Konatsu, Sawa, and the music they make in their ensemble weave a tiny but dazzling story of the power of music.

The last summer of high school… It’s too soon to give up on dreams. The song echoing throughout Enoshima continues to give us courage today.