While not related to any existing anime/manga property, G-Rev’s new game Strania – The Stella Machine may feel strangely familiar to otaku. As the company’s previous effort Senkou no Ronde (Wartech) was full of winks to Keiko Takemiya’s sci-fi shoujo classic To Terra, Strania completely co-opts the look of a post-Gundam mecha anime that Sunrise might have made in 1986. Check out that boxy robot: I feel warm and fuzzy just looking at it! Of course, just like Senkou, Strania offers a lot more to the player than just a familiar aesthetic. 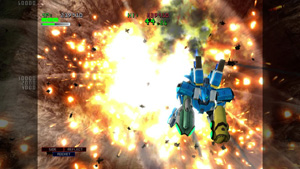 The game is another arcade-styled shooter, but one entirely apart from the popular “bullet hell” mode, popularized by Cave, that presently dominates the genre. Rather than focusing on dodging varying patterns of curtain fire (though certainly, such moments exist in this game), Strania is more concerned with the environments themselves and the bullets that you are firing.

The place is an ’80s anime space war (the details of which are not really present), and the 3D graphics are not exactly state of the art: if I were to place Strania’s graphics in an era, it would be firmly in 2001 on the Dreamcast. Of course, I’m one of those weird guys from whom that is a compliment. Though played on a two-dimensional field, the game plays around a bit with its 3D graphics: twisting the camera around the player for dramatic views of incoming bosses, for example. That’s about it for visual invention, though: this is, after all, a ten-dollar game on Xbox Live Arcade (with a staff of about as many, going by the credits).

The real heart of the game is the weapons system. Your robot can carry a small arsenal—rockets, bullets that bounce off walls, even a powerful, melee-only sword—and they’re all good for something. They’re so good, in fact, that you can carry more than one at once! 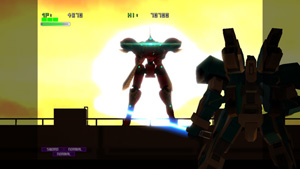 Your robot keeps weapons in three places: one in the left hand, one in the right hand, and one in storage on the back. When you fire, you’re shooting the weapons in both hands at the same time. Another button rotates your weapons, so you effectively have three different weapon loadouts at any given time. Picking an efficient weapon setup for the situation and swapping between them quickly when needed is vital.

The stages are designed to force you into switching up: you’ll be shoved into tight corridors where lasers are useless, you’ll take on a stage that has to be played sideways or a boss that attacks from every side of the screen. Because you pick up weapons as they appear, staying alive in this game often entails puzzling out when you’ll be using which gun (like on the heavily pattern-based, extremely retro boss battles) and picking them up well ahead of time.

Or you can die! Strania is stricter than most recent games in its genre: By default you get three lives and no continues, and this is the only setting accepted for online leaderboads. You can give yourself extra lives and credits during setup, and playing for long enough will give you more credits. It’s clear that the developers don’t want the player to simply make a bore of the game by mashing through continues. Strania sternly demands effort: the game doesn’t even give you the final stage or ending unless you clear Hard mode! 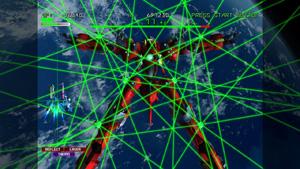 While it never approaches (nor does it want to approach) the bullet clouds that are more popular in the genre, Strania is a formidable opponent in different ways. It takes me back to Taito in the mid-90s, complete with a soundtrack that I confused for the work of one of their ex-composers (it’s actually by Keishi Yonao, who you probably don’t remember from the totally awesome Asuka 120% Burning Fest titles). Gaming children of the ’90s and anybody interested in a unique challenge may well want to give it ten bucks.