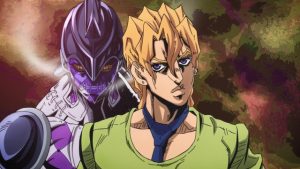 A fourth character promo is here to hype up the upcoming anime adaptation of JoJo’s Bizarre Adventure: Golden Wind, which premieres on TV in Japan this October. Following up on Giorgo Giovanna, Leone Abbachio, and Guido Mista, we have an early peek at the Junya Enoki-voiced Pannacotta Fugo and his Stand, Purple Haze.

Giorno Giovanna is a young man that lives in Naples and is the son of DIO, the nemesis of the Joestar family. When he was younger, he was oppressed and started acting out, but one day, he saved a gang member and then learned how to trust people. Bizarrely, he never forgot that and learned how to be respectful with his own gang that straightened him out. That’s also how he started aspiring to become a Gang-Star. Now fifteen, Giorno gets in trouble with the gang Passione, which controls the Italian mafia underworld, and now, he’s being targeted.