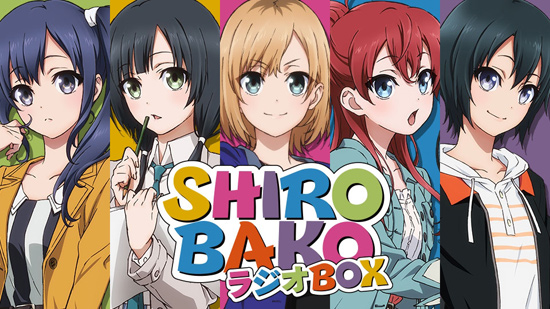 Shirobako has been one of the most pleasant surprises of the anime season: a delightful office comedy about the work of actually putting together anime. This is a very meta premise, with more than its share of industry in-jokes and not one but multiple shows-within-the-show.

In fact, you might have noticed that though the main girls are all drawn in a very contemporary moe anime style, nobody else in the show is really drawn that way. Most of the characters you see in a typical episode of Shirobako actually look like real people. This is because many of them are.

That’s right; plenty of the characters in Shirobako are directly based on actual people in the animation field. Even the voice actor agencies are based on the real thing! To cover it all would be well beyond the bounds of a simple feature, but in the spirit of a finer otaku education we offer a short briefing on who is who in the world of Musashino Animation. 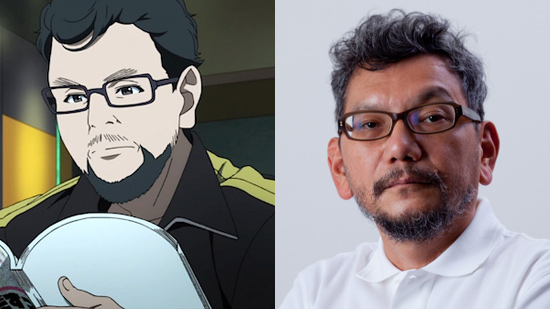 Among the most famous and conspicuous of Shirobako’s “cameos”: the Eva-colored sofas in his office were not exactly subtle, and most fans understand the inherent gravity of the mid-series cliffhanger “Aoi is so desperate she’s going to beg Mitsuaki Kanno to finish some key frames.” In case you don’t, Hideaki Anno is the creator of Neon Genesis Evangelion, one of the defining anime works of the 90s and an ongoing, massive phenomenon whose popularity continues unabated 20 years later.

Anno’s eccentricity is a direct part of the Eva mythos, so it’s natural that he has his own fanbase. It isn’t even unusual for him to be fictionalized like this: once it was in his college friend Kazuhiko Shimamoto’s Aoi Honoo (Blue Blazes) as an untouchable ace, and his own wife Moyoco did so in Insufficient Direction, as a goofy manchild who measures their living space by the amount of Kamen Rider figures he can fit in it. By contrast, in Shirobako Kanno is all business with a keen eye and staggering, encyclopedic knowledge of his field. A portrait painted by a co-worker, certainly. 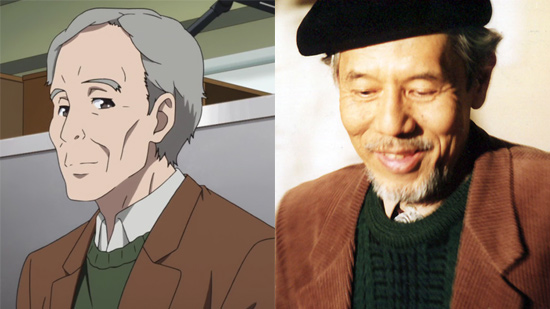 It is speculated (see this forum thread, where they find Sugie’s outfit in real life) that Sugie’s basis is the departed Yasuji Mori, due to the similarity of Shirobako’s fictional show “Andes Chucky” to the real-life anime “Rocky Chuck,” for which Mori was the animation director. Mori specialized in this kind of animal animation: I believe Hustle Punch is called out in the show.

If we are correct… Mori is a legend from the (very) early days who even taught Ghibli’s Miyazaki (yes, him) and Takahata. The fictionalized version, Sugie, can’t draw modern moe but specializes in drawing animals – remember the horses in Exodus, or when Sugie praises Ema for her animation of a cat? – and serves as a mentor to the younger animators. Read Mori’s bio on Anipages. 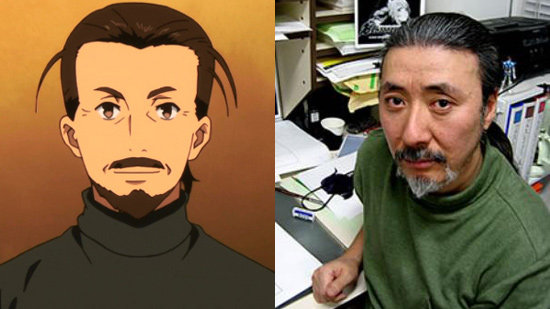 Ichiro Itano is most famous for the “Itano Circus,” the name informally given to his stylized, dancing barrages of missiles from the original Macross series (in the show it’s the Kitano Circus). He’s probably tired of hearing about that already. Another industry veteran who remains active to this day, but rarely in a lead creative capacity. Has worked on quite a lot of ultraviolent, splattery material: see Angel Cop, Megazone 23 Part II, and the grossest episode of Violence Jack. I wonder if he was needed during Exodus…

In the TV show, Kitano pops up in an episode where the 3D and 2D animators are fighting, as the man who’s been to both places and shuts the fight down with his superior experience. In real life, Itano is unafraid to experiment extensively with 3D: see Blassreiter. Right now he’s working on Gundam: The Origin as a unit director. 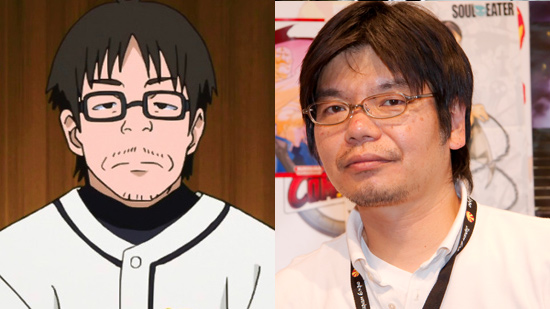 Minami is the president of BONES, a studio made up of ex-Sunrise talent responsible for major titles like the Full Metal Alchemist TV series and Space Dandy. This fictionalization is so un-disguised that one must assume that Minami asked not to be disguised. The real Minami is also known to go around in that baseball shirt’n’cap. Minami’s also fictionalized along with Anno in Blue Blazes: he briefly appears in a scene where he instantly rounds up the best artists in his college art class by sight.

This interview with Minami reveals that yes, the guy probably is that blunt.

Aside from the name, The Born’s building is exactly the same as BONES’. 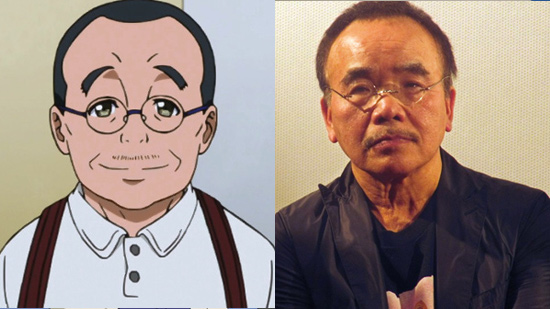 Maruyama is a co-founder of the legendary Madhouse studio and has more recently struck out on his own with his new studio MAPPA. As with his anime counterpart, Maruyama is a super-nice dude whose enthusiasm for the animation business has not flagged at all despite his age. He also never misses an Otakon, where he puts on a great panel every year to the very small crowd of people who are aware of who he is. I suspect that number will increase this year…

One could speculate that this makes Musani Madhouse (it can’t be MAPPA, as MAPPA is too new), but it’s probably more of an amalgam of older studios. Recall all the “They’re still around?” in reference to Musani animating The Third Air Girls’ Squad.

We had the opportunity to interview Maruyama shortly after he founded MAPPA, so definitely check that out. 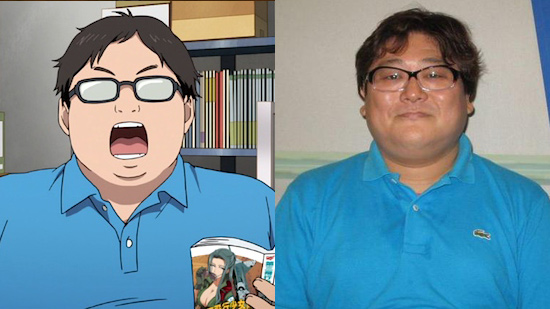 Mizushima has earned this indulgence through years of distinguished service to the anime industry dating back to the late 80s, when he was doing Miyamori’s job on City Hunter. More recently, you may remember him as having directed the first Full Metal Alchemist series and movie, as well as the Gundam 00 franchise. Arguably the show’s other moe character, Kinoshita’s portrayed as a flighty boy-man with a head full of dreams: his power and his weakness. Is this how the man really is? Check out this 2011 fan interview and see what kind of vibe you get. Note that the director of Shirobako is Tsutomu Mizushima, not Seiji. 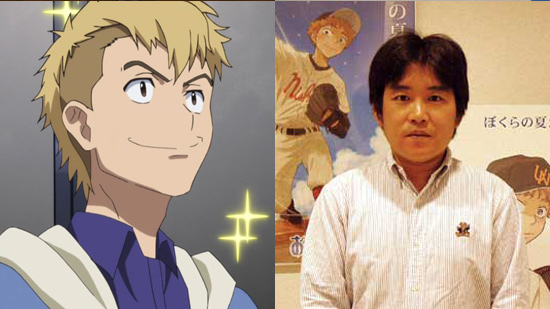 That’s right. The incompetent production assistant Tarou, the guy everybody hates, is actually based on the director himself in his younger days. Like Tarou, he didn’t have any understanding of the process, was incompetent, and wildly overrated his own abilities. So don’t think that a Tarou can’t get their head on straight one day and do great things! …It’s just that most Tarous don’t. 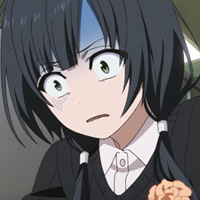 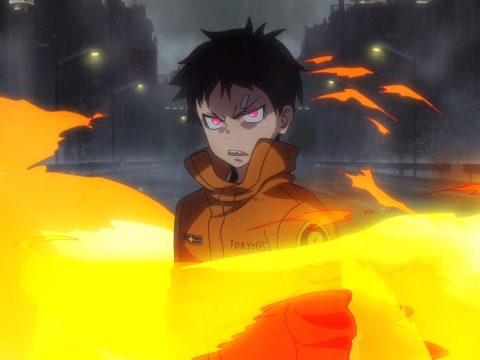