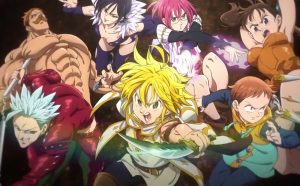 The Seven Deadly Sins: Prisoners of the Sky anime film opens in Japan on August 18, and ahead of that we have another preview to dig into. This one comes from the official website, which highlights some of the movie’s new characters, including Winged People Clan members Zoria and Banes. Meet them along with Six Knights of Black of the Demon Clan members Bellion, Gala, Dahaka, Derocchio, Aterra, and Pump in the video below.

Akio Ohtsuka voices Zoria, and Reiko Suzuki voices Banes. As for the Six Knights of Black of the Demon Clan members, here’s who’s playing who: