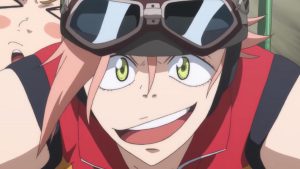 The FLCL Progressive and FLCL Alternative anime series are getting their own compilation films in Japan, and TOHO has a new promo online to preview the feature versions. Jam along to the music of The Pillows and check out the promo along with a new visual by character designer Yoshiyuki Sadamoto below.