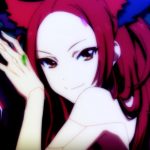 The latest preview for sci fi anime Beatless—which adapts the novel written by Satoshi Hase and illustrated by Redjuice—comes in the form of a 15-second commercial. It may be quick, but it manages to do a great job of teasing the colorful series from director Seiji Mizushima (Fullmetal Alchemist) and writers Tatsuya Takahashi and Go Zappa.

The series kicks off on January 12, with GARNiDELiA on the opening theme and ClariS on the ending, and you can see the new ad below.