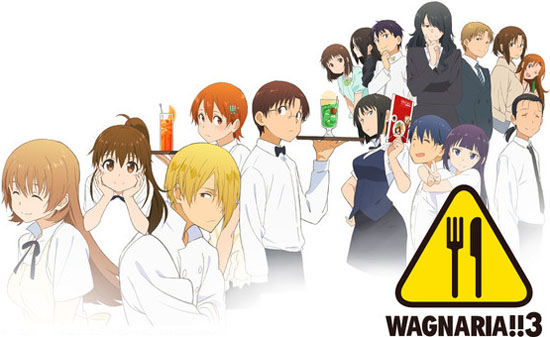 Food service isn’t for the weak. Low wages, cranky customers, the insanity of the lunch and dinnertime rush, and then, of course, there are the occupational hazards. I mean, who knows if around the next corner awaits a flying fist to the face? Well, the dangers encountered by one Souta Takanashi may not be conventional, but they are certainly comedic.

It’s been over three years since the animated version of Hokkaido prefecture’s Wagnaria family restaurant last locked up for the night, and in the meantime, Karino Takatsu wrapped up the manga Working!!, the four-panel source material that offers a slice of pie with its slice of life, after a nearly 10-year illustrious run. With fresh ingredients at the ready, studio A-1 Pictures has reopened the eatery’s doors to serve a third course of 13 delectable episodes, titled Wagnaria!!3 in the Western world. And those who found their appetites merely whetted by the first two seasons can expect to leave full and satisfied this time around. 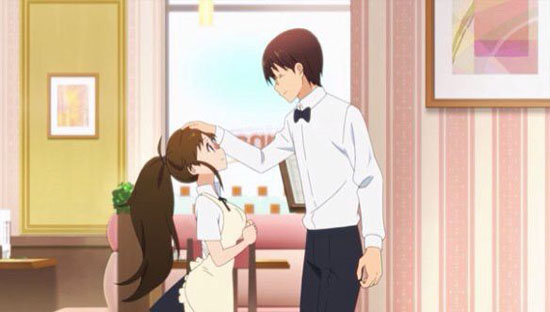 At first glance, not much has changed with the wacky waitstaff and backhouse workers of this quaint establishment. Sole waiter Souta continues to punch in for his part-time hours while striving to dodge punches, or literally die trying, from androphobic waitress Mahiru Inami, simply for the pleasure of working alongside pint-sized server Popura Taneshima, named after the resilient poplar tree in hope that she’d grow big and strong. An amusing cosmic joke, that one. What’s in a name, though, considering Popura still can’t grasp that Souta’s surname isn’t, in fact, “Katanashi.” But as long as Souta can revel in all things cute and small, an eyebrow-raising preference stemming from a home life of kowtowing to four Amazonian sisters, it’s all good. The only problem? Souta’s world view is in for a shake up as he takes a liking to a person most unexpected.

Yes, change is afoot at Wagnaria, and this extends beyond those working the floor. The series has abounded with both secret crushes and unanswered questions from day one, and finally, with Wagnaria!!3, we see meaningful headway. Be it chef Jun Satou, suffering under the weight of unrequited love, mustering the courage to ask out chief Yachiyo Todoroki, manager Kyoko Shirafuji’s #1 fangirl, or butterfingered Aoi Yamada, who breaks so many dishes she may as well start shouting “Opa!”, spilling the beans—or natto, more specifically—on her real identity, story progression that was once measured in baby steps now advances by leaps and bounds. 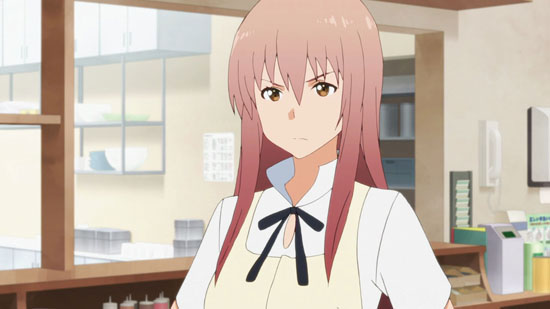 Each member of the cast grows in his or her own way, and said lineup grows as well. Characters who had little time to shine previously, like Aoi’s maybe-so-maybe-not brother Kirio and Kyoko’s underlings from her days of juvenile delinquency, Mitsuki and Youhei, become season regulars, and new oddballs join the roster as heretofore unseen family members are introduced.

It truly is remarkable just how much Wagnaria!!3 accomplishes given its moderate length and the volume of content it juggles, while also maintaining a consistently clean, polished look. Thanks, of course, is due to the foundation painstakingly built in the prior seasons. Everything falls neatly into place, with both hilarious and heartwarming results, proving that patience is rewarded. 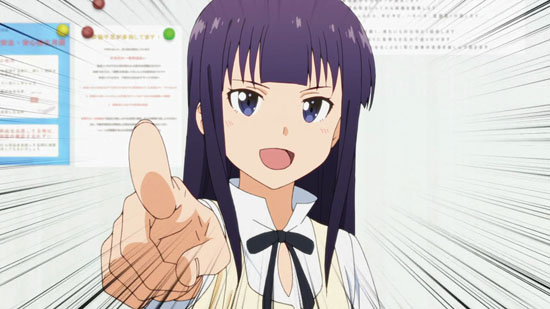 The underlying message of Wagnaria!!3 is that things can’t remain the same forever, a sentiment any service industry employee can relate to given the typically high turnover rate. This is particularly difficult when one finds joy in the here and now. But life moves forward, and the staff of Wagnaria deserves applause for finding the backbone to pursue their goals when lesser characters would waffle. We too will have to treasure the memories, as Wagnaria!!3 very much feels like a final send-off, though viewers can look forward to the one-hour special “Lord of the Takanashi,” which parodies retro role-playing games à la Dragon Quest. After that, it’ll be time for closing procedures once again, but rest assured, Wagnaria is in good hands.