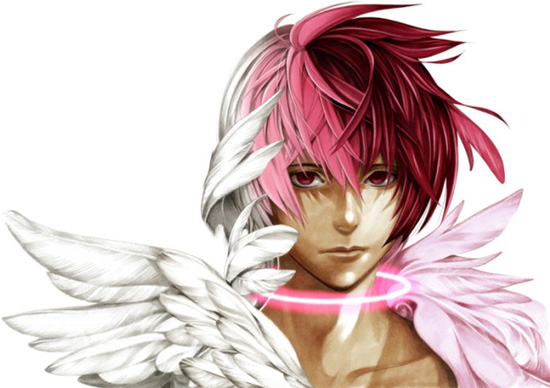 High school student Mirai has nothing left to live for: abused by his stepparents, depressed more than life can bear, he jumps off the roof of a skyscraper. Miraculously, he’s rescued by his guardian angel, Nasse, a cute girl with big feathery wings. To make him happy, Nasse gives him two gifts: magic red arrows that can make anyone fall in love with him and magic wings that will let him travel anywhere around the world.

At first numb and apathetic, Mirai comes to respect the power of the angel’s gifts, but then he discovers there are 12 other angels on Earth, linked to other mortals, and based on how they use their gifts, one mortal will be chosen to become God! But the other candidates are an awful bunch, from a celebrity who uses his arrows to seduce women, to a sociopath whose white arrows give him the power to kill anyone he wants. Nasse, too, doesn’t seem at all disturbed by the idea of Mirai using his powers to control or kill.

Can Mirai, who is basically good at heart, survive the competition to become God?
A story about superpowers and morality (there’s even a literal masked superhero who appears), 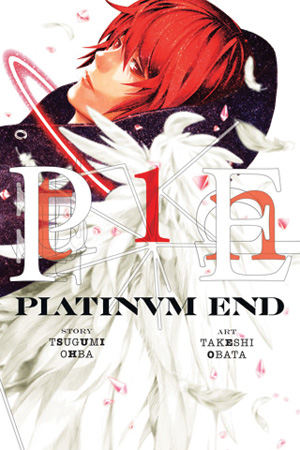 Platinum End attempts to recapture the magic of Ohba & Obata’s first collaboration Death Note. But where that series ​started with a simple premise and everything snowballed from the main character’s motivations, Platinum End has a more wishy-washy protagonist and a more complicated, clichéd, tournament-style setup (not to mention enough sexual sleaze, though it’s confined to one chapter in Volume 1, to get the series an 18+ rating).

There are fitful flashes of Ohba’s clever plotting, as Mirai schemes to hide from or fight his enemies, but more often, the weight of the story is supported by Obata’s art: gorgeous scenes like the one when Mirai flies for the first time, and capable art of bizarre angels, cute women, and caricatural side characters. An adequately written, well-drawn manga from anyone else, from Ohba & Obata it’s a letdown. 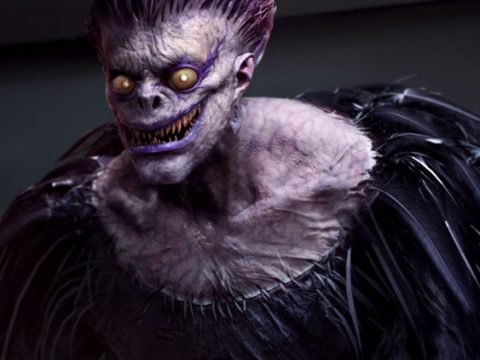