[Review] Is It Wrong to Try to Pick Up Girls in a Dungeon? 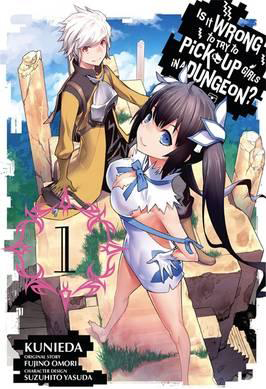 You don’t see many manga based on tabletop role-playing games these days. For the most part they’ve been supplanted by manga (oh so many manga) based on video gaming, so there’s a certain retro charm to Is It Wrong to Try to Pick Up Girls in a Dungeon? This is a manga so firmly inspired by old-school games of the Dungeons & Dragons variety that it features an actual dungeon. Also hit points, special abilities, guilds, and characters’ strength levels affected by what might as well be rolls of a 20-sided die.

In the world of Dungeon, gods and goddesses (but mostly goddesses) have descended to the mortal realm to patronize guilds of adventurers. Most guilds have well-balanced parties to send out on dungeon crawls, but plucky young Bell Cranel is a guild of one, the sole follower of a down-on-her-luck goddess. She’s eventually revealed to be Hestia, Greek goddess of the hearth, but she’s your standard perky, slightly dim, erotically-yet-confusingly-costumed Manga Pixie Dream Girl, so it doesn’t particularly matter which classical deity she’s supposed to be. Bell isn’t much of a fighter, but he keeps descending into the labyrinthine dungeon around which his world is built, bent on questing for his goddess and farming for HP.

The first chapter wrings comedy from the pathos of the lead characters, with Bell horndogging after sexy lady warriors while Hestia gets drunk and laments their lowly status. But the manga (and, presumably, the light novel series on which this is all based) quickly abandons laughs for nerdy, D&D-themed wish fulfillment. It turns out Bell is growing stronger at an implausible rate, because reasons, and every sexy girl and/or goddess he meets falls in love with him, also because reasons. Bell stops being a skirt-chaser just when it would be interesting, rendering the title moot, and falls for 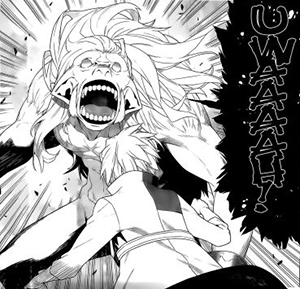 a powerful tsundere swordswoman who doesn’t know he exists.

Bell is a blank of a character, so it’s not surprising that the manga becomes more interested in the political maneuvering between the goddesses than in following its hero into the dungeon to hunt owlbears or whatever. This also means the artist can draw fewer action scenes and monsters and more generically cute female faces, which is way easier and, let’s face it, more enjoyable for everyone involved. It’s a decent enough gaming-based adventure/harem manga, but is there a reason to choose this one over the six million other manga with the same setup? Maybe if you really, really like D&D.

Gatchaman The Movie Brings a Big Screen Classic to Blu-ray & DVD
Gangsta. Offers Shootouts and Swordfights in the Seinen Style