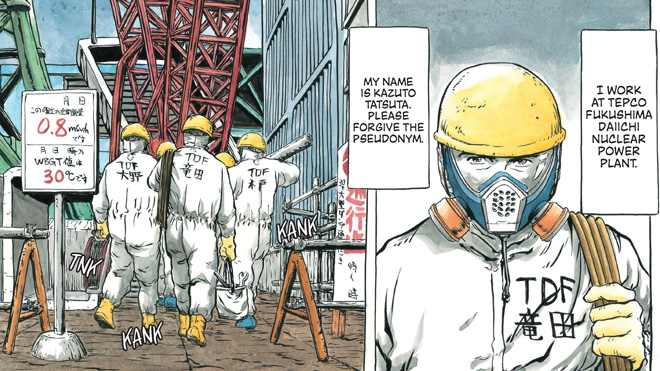 Kazuto Tatsuta is a middle-aged man from Tokyo who became determined to work cleaning up the infamous Fukushima Daiichi nuclear power plant after it was severely damaged in the March 2011 tsunami. Ichi-F describes his everyday life in Fukushima, from the mundanity of apartment hunting with other men his age to the specifics of putting on a protective mask without giving himself a headache. It is autobiographical, though Tatsuta’s name is a pseudonym and most details are anonymized.

In anime, “slice of life” is a genre associated with cute teenage girls. However, manga offers far more diversity than anime and Ichi-F is a fascinating example of what slice of life can offer: real insight into the lives of those occupying unusual positions, viewing the world from a rare perspective. Some will find this slow-paced and boring. Others will be absorbed in the extensive explanation of life in this most exceptional of circumstances.

Ichi-F is slice of life in the truest sense; there is no story arc or character development, just a man dipping into his memories and relaying one incident at a time. The exciting incidents, such as taking on a high-risk job, he brings down to earth by outlining the processes around them. The banal incidents, such as looking for a new job, he adds color to by explaining the complicated system of contractors and subcontractors requiring him to meet rival potential employers in secret as if for a drug deal.

As an artist, Tatsuta’s biggest problem is with people. Facial expressions are often a little rough, overly similar, not as expressive as they could be, 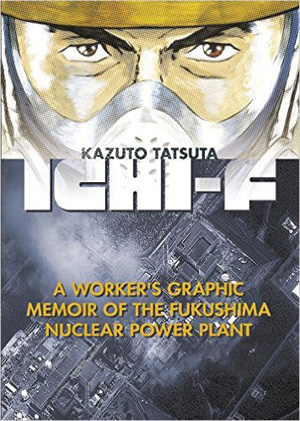 while comedic moments are underwhelming. In this particular manga that’s not too much of a problem, though. It’s fortunate that the characters spend so much time in masks, or surrounded by much more interesting backgrounds that Tatsuta renders in beautiful detail.

Detail is where Tatsuta excels. His art of the power plant, safety equipment and scenery is rich, while his explanations are thorough and clear, often making use of little maps or diagrams. This is no textbook though. His internal monologue expresses frustration with the urban legends surrounding the plant, sympathy for coworkers who lost their homes in the tsunami, even agonizing over an itchy nose once sealed into a mask and surrounded by dangerous radiation levels. This is a very human look at a sensationalized issue, and Tatsuta’s approach is level headed and informative without being dry.
Recommended.