[Review] I Am a Hero 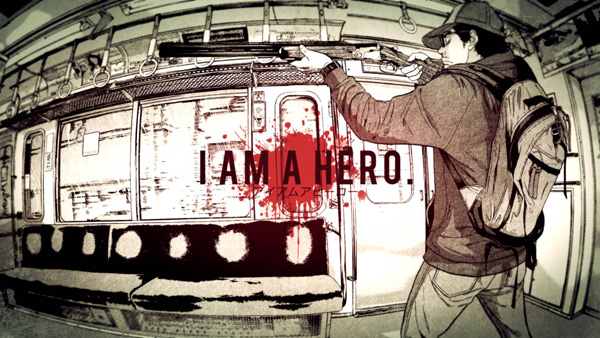 Hideo Suzuki is 35 and still talks to his imaginary friend. Haunted by hallucinations, he often spends all night in his apartment waiting for the visions to end and for dawn to arrive. By day he works as an assistant to a porno mangaka, responding to his coworkers’ inane talk with his own long rants about the future of manga (coworker: “Could you please stop talking to yourself?”). He’s the kind of person you probably wouldn’t want owning a gun, but surprise: he’s got a licensed sport shotgun, a rarity in Japan! Thankfully he’s also got Tekko, his equally geeky girlfriend, whom he loves despite his deep insecurities and flaws. Approaching middle age with his life and career still on hold, he confesses bitterly to no one in particular: “I don’t need to be the hero, but I’d at least like to be the main character in my own life.”

But while Hideo dreams of success, something worse than hallucinations brews behind the scenes: rumors of vicious biting attacks, pedestrians wearing flu masks to fend off some unknown illness, glimpses of people walking the streets at night with horrible injuries that should be fatal. Suddenly, the dam of horror bursts, Japan Self-Defense Forces trucks are rumbling in the streets, and oblivious newscasters are reporting “6 Dead, Over 700 Injured” as Tokyo runs riot with hideous, babbling, running zombies!!

Saved from the first onslaught against all odds, Hideo finds himself racing for his life through a rapidly zombifying Tokyo, past dozens of snapshots of horror (“Gyaah! Stop biting me!” “Mama, why?! Why are you doing this?!”). Meanwhile, Chekhov’s Law of Drama (“if a gun shows up in the first act, it must be fired in the second act”) is tested to the extreme, as our mild-mannered hero repeatedly can’t bring himself to unsheath his shotgun and start blasting at zombies (“No. I can’t. That would violate the firearm and sword control laws!”). But there’s more than one man’s madness at stake as even the most isolated parts of Japan are overwhelmed by the cannibal hordes … 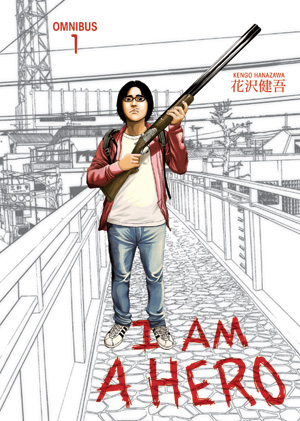 With its initial focus on an unreliable narrator’s disturbed worldview, I Am a Hero at first seems like it might be a manga about psychosis like Hideo Yamamoto’s Homunculus (name-dropped here), but all that turns out to be a skillful fakeout for the greatest zombie manga ever made. Readers who endure (or rather enjoy) the slow buildup—almost 200 pages pass before the first onscreen zombie attack—will be more than rewarded in the second half of Dark Horse’s 400-page omnibus as the story explodes into masterfully staged chase scenes and terrifying multiple-page wordless horror sequences.

Hanazawa’s slightly goofy character artwork is equally well suited for drawing the mousy living and the maniacal undead, solving the common “fast zombie” movie problem that the zombies are scary when they’re moving, but in closeup they just look like underpaid actors making snarly faces. Here, everything is a little twisted and off kilter, and the delicate balance of horror and humor is just right, even when the manga teases us, for example, with the comically exaggerated obliviousness of bystanders who can’t believe anything is wrong and keep talking on their cell phones even as death sprints right toward them. Despite the often absurdist portrayal of humankind, I am a Hero has a welcome core of empathy for its protagonists, engrossing us first in their mundane lives and then in their desperate dash for survival. Run, don’t walk to the comic store! Recommended.