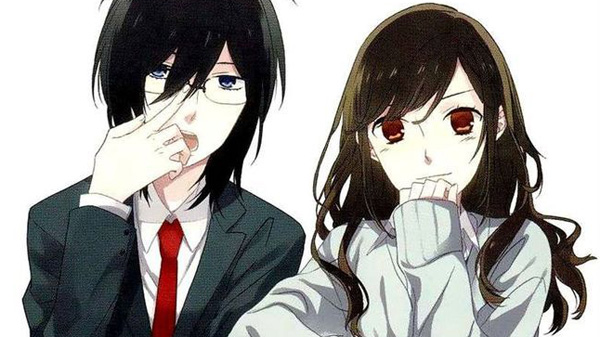 Smart, pretty, and popular, Kyouko Hori is seen as one of the queen bees of her high school. But she doesn’t have much time to enjoy it, because when the bell rings she has to rush home, change into frumpy clothes, and serve as primary caregiver to her little brother. One afternoon, Hori runs into her classmate Miyamura, a gloomy, bespectacled loner everyone assumes is some kind of nerd.

Turns out Miyamura has an extracurricular double life of his own as a tattooed, pierced, unexpectedly sexy punk. But he’s a sweet guy in either persona, and soon Hori and Miyamura come to enjoy spending time together, just being themselves. As everyone at school wonders why the popular girl is hanging out with the quiet geek, it seems inevitable that their friendship will deepen into something more … 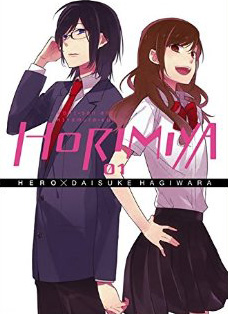 Originally a webcomic but rewritten and redrawn for print, Horimiya (an abbreviation of Hori-san and Miyamura-kun, as well as the characters’ built-in couple name) is the gentlest of shojo romance manga. The leads are nice kids, and there’s never much doubt about their feelings for each other; by the end of Volume 1, each of them is in love, and all that remains is for one of them to say it out loud. Romantic rivals show up to threaten the relationship but wind up rooting for Hori and Miyamura to find happiness. Even the secrets that bring them together are mild: OMG, Hori takes off her makeup after school! The scandal!

Even if it’s not the most thrilling manga, it’s a charming, entertaining, quietly absorbing read. Daisuke Hagiwara’s art adds a lot of that charm, bringing the characters to expressive life. It’s a rosy fantasy of first love, where all differences are surmountable, people look after each other and make each other soup after a hard day, and every nerd turns into a hottie when he takes off his glasses.