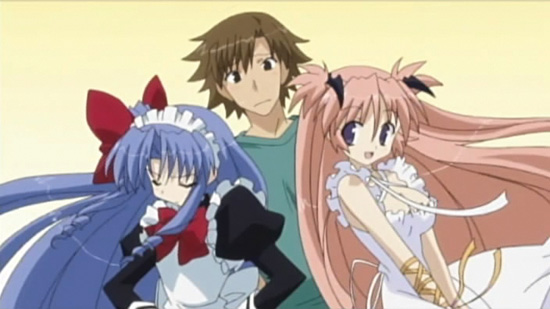 You’ve probably seen Good Luck! Ninomiya-kun before, from its tired set of tropes to its recycled character designs, in just about every other harem series ever. All that’s different here are the names and the premise—kind of. Unfortunately, that just isn’t enough to elevate it above the rest of the shows out there. It’s cute enough, but it also happens to be a big muddled mess of tired narrative vehicles, awful artwork in certain areas, and forgettable characters. And that’s all revealed in the first episode!

Shungo Ninomiya lives in a huge mansion and his sister happens to be a mercenary. When a military chopper shows up at Ninomiya’s school one day after he was being harassed by a female student hell bent on showing him her panties (you can’t make this stuff up), his entire life changes. All of a sudden a strange pink-haired girl is to start living with him. Her name is Tsukimaru Mayu, and she just happens to be a succubus who’s deathly afraid of men. For some reason, Ninomiya isn’t affected by her powers, which happen to be triggered when she’s distressed. Of course Ninomiya’s training with his sister goes a long way when it comes to keeping googly-eyed men away from Mayu, and so it seems like the pair are a match made in heaven. 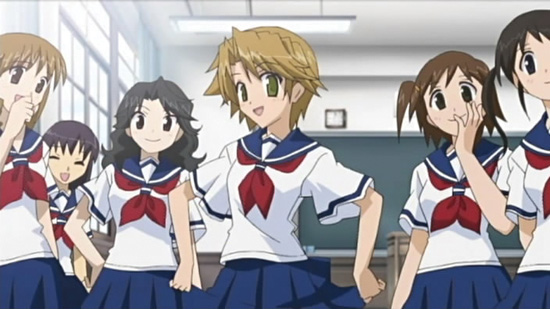 As you might have expected, with Mayu in the house things get a little ridiculous very fast, as Ninomiya is forced to sleep with her and interact with her at all times to get her over her fear of men. It seems immersion therapy is the only way to “cure” her, which makes no sense given that she’s hardly scared of Ninomiya or living with him even though technically he’s the same as the rest of the lovestruck men who try to pursue her, just not as out of it as they are. If they try to touch her, however, they faint. Ninomiya’s resistance is a central part of the narrative, of course, as he’s the “chosen one” that can interact with Mayu without issue.

What results across the rest of the series are tons of times where Ninomiya ends up falling on top of Mayu, seeing her panties, touching her breasts, or getting himself into compromising positions where it looks like they’re getting into something much more scandalous than it is. With a childhood friend who isn’t a huge fan of the relationship with Mayu and other characters vying for Ninomiya’s attention, you’ve got the recipe for a plodding, by-the-numbers supernatural harem series that simply isn’t that visually appealing. 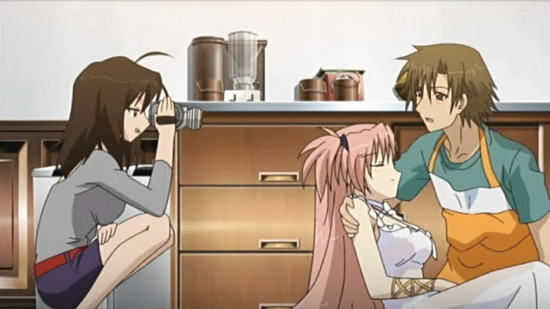 From the first episode there are sloppy character designs and a bizarre tilt to characters’ eyes, which are just slightly too large for their faces, even when it comes to anime. The characters themselves are middling, but it doesn’t matter so much what they behave like since they’re mainly a vehicle for plenty of panty shots and impeccably drawn breasts. There’s nothing wrong 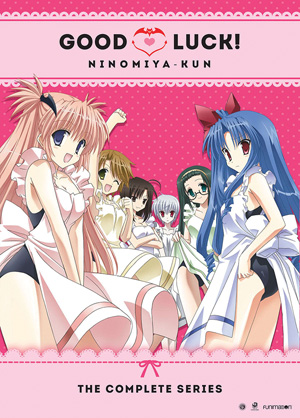 with that if you’re looking for a romance riddled with ecchi, but it’s so plain and vanilla for a being that’s supposed to be a succubus that it really should have attempted going the extra mile rather than settling for the occasional accidental nudity like Mayu slipping and falling out of her towel or other ridiculous “accidents.”

Good Luck! Ninomiya-kun refers to Ninomiya both helping Mayu with her androphobia (fear of men) as well as the possibilities that Ninomiya may “lose control” while living with a beautiful girl under his roof. But with a character that’s not even really afraid of the man she’s living with straight out of the gate, it just seems pretty pointless to see what happens. There are far better harem comedies out there, with much stronger cases for you to watch them all the way through.