Queen’s Blade: Beautiful Warriors Expands on the Most Rugged Fighters Around 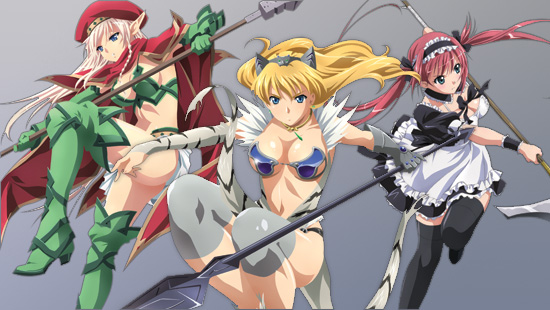 They may be gorgeous women, but first and foremost they’re fierce warriors. Welcome to the world of Queen’s Blade, a female-centric media franchise with spinoffs, series, and various other pieces of entertainment that explore a world where women are the most rugged fighters around, competing in a tournament known only as the Queen’s Blade.

Queen’s Blade: Beautiful Warriors is a six-episode OVA series designed to make it simpler for viewers of the original series’ sequel (The Evil Eye saga) to transition over to the Rebellion saga, which acts as a change from the main cast of characters from the first two seasons. It’s one last dance with familiar combatants, and one dazzling look at some of the strongest women you’ll ever come face to face with in anime. 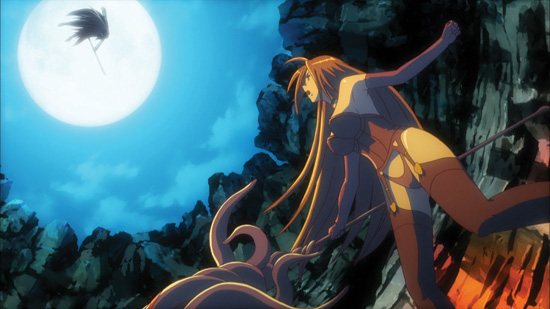 Beautiful Warriors follows a more episodic format than that of the previous seasons of Queen’s Blade, focusing on clusters of characters to tell their back stories, struggles, and growth as fighters. If there’s a particular fighter you became enamored with during the course of the regular show, you’ll have time to get to know her here, with most of the cast from the first two seasons of Queen’s Blade returning, without any additional characters added to the cast. If you’re looking for a prelude of sorts to Season 3, you won’t find it here—this is all about taking it back to the classics.

You’ll be following Nowa, Elina, Alleyne, Nanael, Tomoe, Nyx, the Swamp Witch trio, and Aldra for the course of the series, with special appearances by lesser characters you might have seen in the first two seasons. There’s one face that’s conspicuously absent, unfortunately, and those who have stuck around from the beginning will find her absence undoubtedly frustrating. It all works out in the end, however, with the bevy of women there actually are. Chances are, if you identified with or enjoyed following a certain fighter’s story, she’s on board with this OVA for you to watch and enjoy. It’s like a piece of delicious fan service candy wrapped up in collectible Queen’s Blade packaging—which one do you want to eat first? 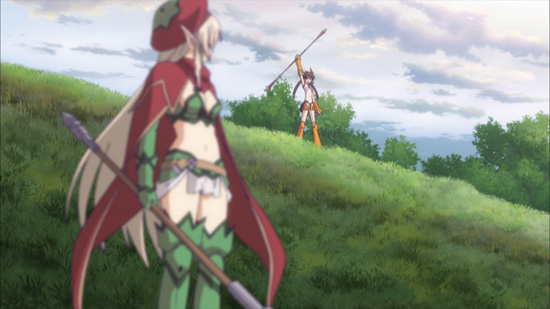 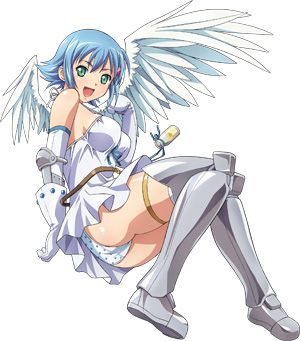 be rescued. Elina looks back on the relationship she and Leina once had as sisters when they were young, and it’s interesting to see them behaving in much the same way again. There’s some definite tension between the sisters that can absolutely be construed as more than some innocent sisterly love, but it’s an emotional and fulfilling reunion all the same.

On the other hand, you’ve got episodes like Nanael’s, which is all about her being fed up with living in heaven. Her solution? Create a harem of servants, which ends up getting her banned to the Swamplands and coming face to face with the Swamp Witch and stripped of her powers. It’s a bizarre and racy tale that eventually culminates in Nanael being able to fulfill her strange wish, but it’s got a completely different feel to it than the aforementioned episode.

That’s not the first time we see the Swamp Witch, either—we also see her in Airi’s episode, where Melona blames her torture on Airi since she must return to the Swamp Witch one day thanks to her Command spell. The episode is a mishmash of Holy Poses and clothes flying off, but it ends up managing to stay light and humorous despite a good amount of action and exposition.

The off-the-wall premises and differences between each character’s “solo to-do list” are part of what make this short OVA so fun, and undoubtedly what will keep viewers watching (or rewatching.)

The episodic nature of each girl’s solo story is unique in that it makes Queen’s Blade: Beautiful Warriors hard to be seen as a cohesive whole and more like six separate stories that must be rated on their own merits. Because of this, and the fact that even lesser characters are given their own special chance to shine, the OVA feels more like a natural extension of the first two series, especially given their aesthetic and aural qualities. 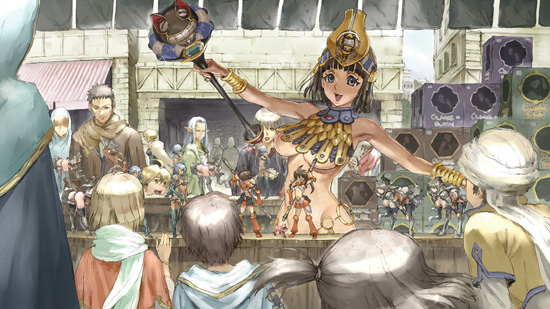 This is, quite possibly, the best Queen’s Blade has ever looked. Because the episodes are OVAs, they’re obviously bestowed with higher production values than a regularly televised series, with gorgeous hues, high-fidelity animation, and plenty of solid frames with a visually pleasing color palette. There’s a “shine” to the characters that was always evident in the series that takes center stage here, and it’s some of the most colorful animation you’re going to see this side of most modern anime series.

As far as voices go, the Japanese cast knocks it out of the park, with lead Aya Hirano playing fan favorite Nanael to pleasing results. It’s an excellent cast of seiyuu with an even more inspired soundtrack that sounds as though it could have been culled from some epic fantasy video game. When you consider all of the various breast jokes and bits of yuri-lite fan service, it’s almost tough to believe the source material can get so risqué, silly, and even emotional, but both the voices and music continue to please. 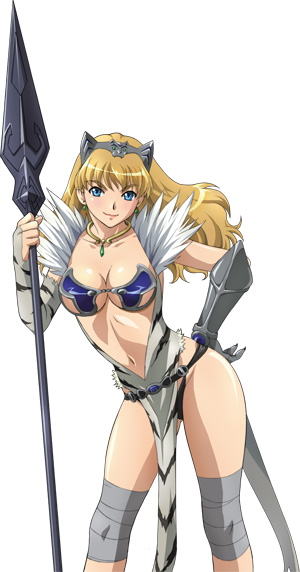 No Need for a Rebellion

Queen’s Blade: Beautiful Warriors, in the end, shapes up to be (quite surprisingly) one of the most consistently interesting, good looking, and intriguing entries in the series proper. The production values allow for better animation, better flow to the series, and quality that you wouldn’t have seen in the show, with stories that not only make sense in the context of the characters involved but offer a sense of closure for fans not wanting to move on to the next “round” of story.

Of course, it’s puzzling as to why the decision was made to exclude the introduction of additional characters from Queen’s Blade: Rebellion, as there were several chances to seamlessly offer them a transition into the series just as the creators meant to give fans an easier time parting with their favorite characters. It would have been an interesting and useful direction to go in had they chosen to do so, but despite the missed opportunities, Beautiful Warriors hits the mark.

You’ll need to be a fan of the original two seasons of Queen’s Blade if you want to fully enjoy Beautiful Warriors, but if you don’t mind reading up on some back story and much-needed plot development, there’s room for newcomers to hop aboard as well, even if it’s only to see just how over-the-top things can really get. Make no mistake, Queen’s Blade has always been about excess in the most delightful ways. If you’ve been following the series from the very beginning, you’ll be in for a treat with Beautiful Warriors. Just don’t be surprised if you find yourself frantically scrambling to get on with the next season after bridging the gap. Queen’s Blade, as a whole, tends to be a very addictive sort of series.