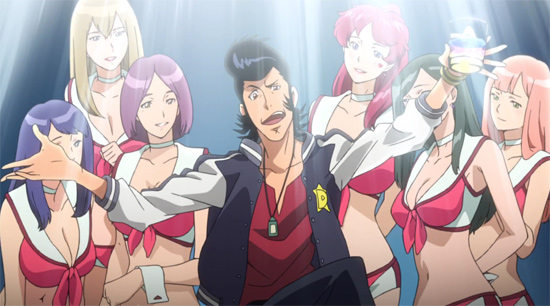 Since the start of Otaku USA e-News a few years ago, Patrick Seitz has become something of a permanent fixture of the late-year interview cycle. He’s always thoughtful and candid about his experiences working in the American side of the industry as a voice actor, script writer, ADR director, and plenty more (the previous two interviews we did with him can be found here (2012) and here (2013).

This time around I had the chance to talk to Patrick about his work as a scriptwriter on the Space Dandy dub, and the occasionally marathon-like process required to meet simulcast deadlines. Oh, and there’s a question about Sailor Moon in there somewhere too. Enjoy!

Jason Moses: First and foremost, let’s talk about your work on the Space Dandy dub. From my understanding — and maybe this is mistaken — this was a case where you had access to everything on that show before the episodes even aired in Japan, right? 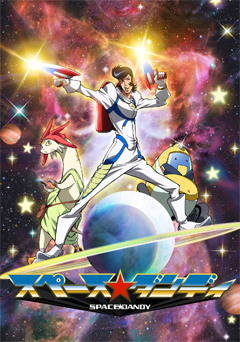 Patrick Seitz: Yeah, you’d get a script, and you’d have about 36 hours to get it completely adapted and turned around. As far as time in the recording booth goes, I think they had about 3 or 4 days to get it dubbed and over to the mixers. It was a very, very abbreviated process, but fun in that kind of masochistic way of… “Oh my God, this is a simulcast, it’s going to be on TV, I have no time to write this thing, here we go.”

But it was neat! You knew whenever the script came down that for the next day and a half, short of a little bit of sleeping, eating and going to the bathroom, it was just going to be that. So the challenge was to make it sound like you didn’t write it in a day and a half. I was really glad to be a part of that process. Wouldn’t want to do it for every show, but I think it worked for Space Dandy.

JM: So to clarify, the process was “OK, we’re sending you all the stuff,” then the translator got the Japanese script, translated it, and sent it to you?

PS: They sent me a video file and a translated script, and I would just run from there.

JM: Was there any point in the middle of this where you felt like you were in a bind, like some kind of crisis situation, “holy cow is this going to work out? …Am I dying?”

PS: I knew it was going to get done. It was just a question of how thrashed I was going to be after the fact. I’m pretty good with deadlines, especially something like that where there’s no wiggle room to run over. Actually, I wrote my last Space Dandy script over Anime Expo weekend, it sort of landed in my lap and I thought “well, I should do it now,” because I was in the middle of a directing project. If I do it over this weekend I won’t have to take time off from directing… fine, let’s do it.

I ended up staying up all night that Sunday to finish it, sent it off, got about 40 minutes sleep, got up, directed all day. Then I came home, passed out at 8 pm, woke up the next morning at 8 am. So I mean, the script was going to get done. It was just a question of whether or not I’d have to sleep half a day in order to recover. Yeah… (laughs) 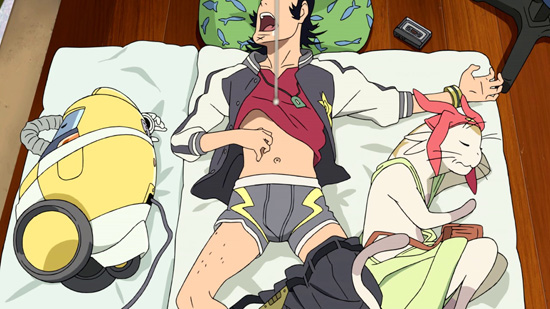 JM: Yow, no kidding. Can you talk about what that directing gig you were working on was or is that still under wraps?

PS: Ah, I can’t say, unfortunately. It was a long directing gig, but it was one that I just wrapped up, hasn’t been announced. Suffice it to say it was something that was commanding all of my attention and all of my energy, so getting to squeeze that final Dandy in over AX was challenging — especially since I had stuff to take care of at AX — but a lot better than me having to do it on some Wednesday/Thursday combination in the middle of directing.

JM: How far in advance were you working on the scripts prior to their air date?

PS: My last one was July 4 weekend, but I don’t remember how many there were after that, because we weren’t necessarily getting them from Japan in order. Space Dandy is one of those shows where you can do that, since every episode is so self-contained. You can do 17, and then do 20, and then do 15. Whatever order you do them in is fine, it was just a question of when we got the stuff from Japan. As soon as we did we’d rock it out. But yeah, it’s been about 3 months since I’ve written one.

JM: Ah, okay. Yeah, the self-contained nature of Space Dandy is interesting, I’ve heard people describe it as “Shinichiro Watanabe lets his cool friends direct an episode: the show” because you really don’t know what you’re going to see one episode to the next…

PS: There were some odd episodes. Interestingly enough, the episode I worked on where Dandy dies and comes back had the least amount of dialogue but was the toughest to do. So little got said but the tone was so serious that it sort got in my head and I ended up psyching myself out a little bit. If it was just back and forth banter it would have been a lot easier to get that ball rolling. It was one of those where I sent it off and wasn’t too sure about how it was going to turn out, but then I saw the final product and was like “oh, okay, that worked, I feel good about that.” 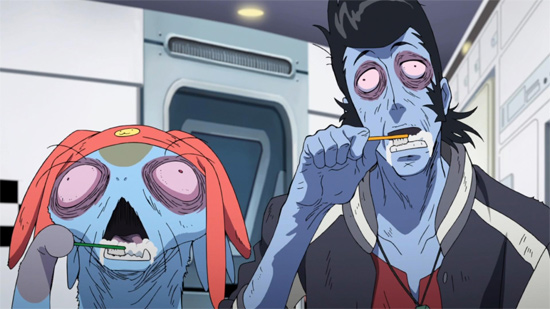 It’s nice on a show like that where it’s coming around so quickly you can see the fruits of your labor immediately after the fact as opposed to doing something on traditional non-broadcast stuff where you do it, it gets recorded and then seemingly like a year later it comes out on a disc.

JM: I remember some folks voicing concern after they pre-screened the first episode at Otakon Vegas and when it aired on TV that the dub differed from the Japanese version, but I feel like I stopped seeing people complain about that sort of thing once the series got rolling. Have you gotten any notable feedback, positive or negative, about the dub?

PS: Yeah, I mean, they were signing off on what we did on both sides of the Pacific, so I just ran with it. For nobody working on this thing was it their first rodeo. They didn’t pick anybody off the street and go “hey kid, you wanna write scripts for anime?!” I felt confident about what we were doing. It felt like if we weren’t doing it right, somebody would pipe up about it because it was on TV for all the world to see. They were not going to be shy about letting us know about it.

JM: Do you feel like you learned something about the process or yourself through working on Dandy, going through the wringer like that?

PS: I think it just reaffirmed how quickly I can get something done if I need to. There have been times where I’ve had more time to work on something and with whatever else I had going on in my life as a freelancer, I had to get to something last minute. But it’s different when you’re doing it to yourself schedule-wise as opposed to “no no, you have these 36 hours to write this. That’s all the time there is. This isn’t something you had a week to do and you spent it doing other things and now you’re stuck paying the piper in the last day and a half. The last day and a half is it. You start at a day and a half, good luck.”

A lot of coffee was ingested during that process. Like I said earlier, I can get stuff done no matter the time frame, it’s just a question of how thrashed I’m going to be after the fact. So I guess I learned that about myself, or if I didn’t learn it, I at least reaffirmed it. Which is good to know!

JM: I imagine this is the kind of thing that varies from person to person, but do you have any advice or wisdom to writers working under the gun like that?

PS: I guess just the added pressure of getting to work on a show like this is an honor and a responsibility, so you’d best bring your A game and do whatever you need to do to make it happen in the time allotted.

JM: That is the anime industry. Anyway!

PS: But if you play your cards right and get it set up so you have time to recuperate, that’s doable.

JM: Did you have a favorite character to write?

PS: Let’s see… I liked ‘em all, honestly. I liked writing for Dandy because you could have him say all the things you can’t without getting slapped. Meow was the same way and QT was fun as sort of the straight man of the bunch. And Dr. Gel, who’s just pompous and hilarious. I don’t know if I had a standout favorite amongst them.

As far as episodes go, even though I only wrote 2/3rds of it, the high school musical episode… When I was doing the episode, I didn’t have translations for the actual songs (Brina Palencia handled the musical part of the episode), so there were these huge swaths where I had no idea what was going on. I just had to run with it. But man, I really enjoyed that one. Everyone kinda figured out “oh, okay, it’s a different thing every week, what are they going to show me now,” and when that episode came out, people were like “okay! That’s fair! I honestly did not see a high school musical episode coming. You got me.”

There were a couple of episodes I missed along the way, too, so I can’t wait for it to come out in one set and I can just go back and revisit the episodes I’ve seen and catch up on the ones I missed. 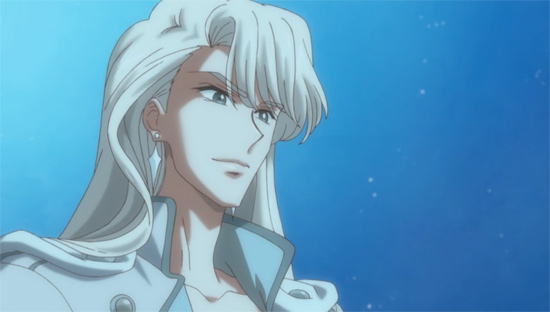 JM: Anything we can look forward to hearing you in during the coming year?

PS: Oh, hm, what am I allowed to talk about… Sailor Moon! I’m playing Kunzite.

JM: That’s right! Are you feeling any pressure playing a character that people have irrational nostalgia goggles for from 20-some years ago?

PS: I should. But I don’t! People have been nice so far. I mean, if the hate comes rolling in maybe I’ll change my tune, but so far so good.

JM: Thank you as always for your time, Patrick.

PS: You’re welcome! Thanks for having me. 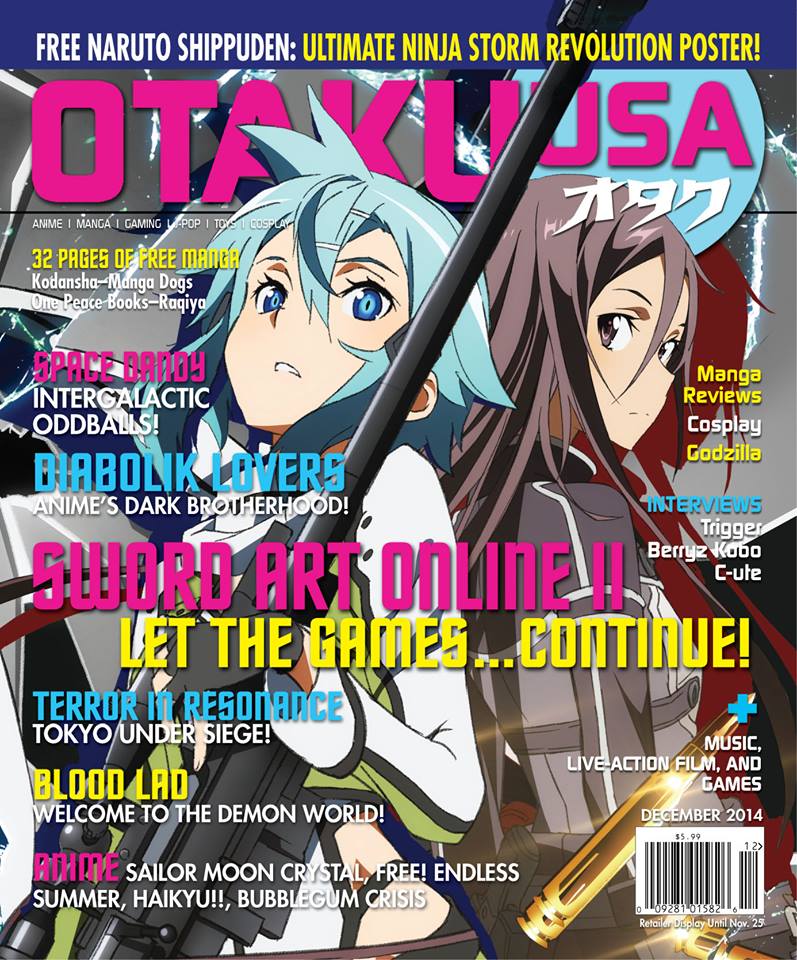 Read our print story on Space Dandy in the December 2014 issue of Otaku USA Magazine. On sale now, it also includes in-depth coverage of Sword Art Online II, Diabolik Lovers, Terror in Resonance, and more of your favorite anime, manga, and games.