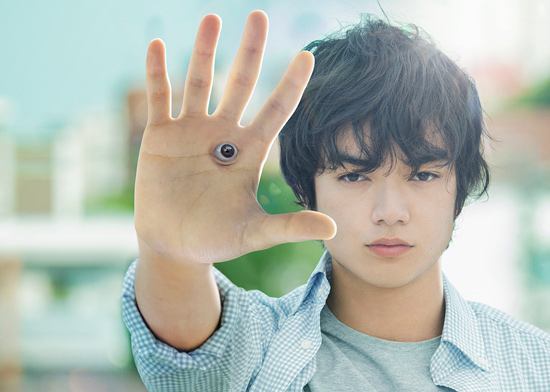 Parasyte, Hitoshi Iwaaki’s early 90s manga about body-snatching creatures who infect humans and attempt to take over the world, is back in a big way this year with an anime series, Parasyte the maxim, and two live-action films, the first of which premiered last week at the Tokyo International Film Festival.

Why all the sudden interest? Japanese studios champing at the bit to adapt the manga were stymied for years by a Hollywood rights deal which finally expired last year. Though it’s pure coincidence, Parasyte, a tale of unwitting infection by hostile beings, fits perfectly into today’s ebola-paranoid world.

Parasyte is the story of Shinichi, a high school student who falls victim to one of the parasitic alien beings that takes over humans’ brains. Thanks to falling asleep wearing earphones, Shinichi’s parasite instead takes over his hand, leaving Shinichi’s brain intact. He and the being in his hand, who names himself Righty, form a symbiotic relationship, taking on parasites who, as it turns out, have a taste for human flesh. 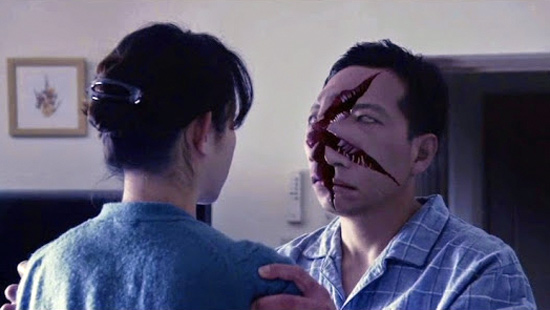 Aside from fitting perfectly into today’s zeitgeist, Parasyte’s also benefitted from the delay in coming to the big screen in that computer graphics have had time to reach a level suitable to the task. Though some Japanese films continue to have their share of dodgy CG, this isn’t the case with Parasyte.

That’s thanks to director Takashi Yamazaki, who also served as the film’s visual effects director. Yamazaki has a long history of directing effects-heavy pictures; his film Always: Sunset on Third Street won awards for recreating post-war Tokyo largely in CG.

All of Parasyte’s funky creatures get prime treatment, but the big effects standout is the film’s co-star, Righty, who becomes a fully fleshed-out character thanks to Yamazaki’s excellent VFX work and vocal performance by actor Sadao Abe.

As a skilled CG artist, Yamazaki also realizes its limitations, and sets most of the effects-heavy scenes at night or in dark spaces, avoiding the scrutiny of a fully-lit scene. This serves a dual purpose, making the parasitic creatures that much creepier.

But Yamazaki and company aren’t just concerned with CG. They’ve also changed some key parts of the original manga. In the original, Shinichi lives with his mother and father, but in the film, his father is dead, which strengthens their relationship while emphasizing the motherhood theme that runs through the film. Purists may not like the changes, but it means Yamazaki’s not running on adaptation autopilot, but rather about how to best adapt Parasyte for the medium. 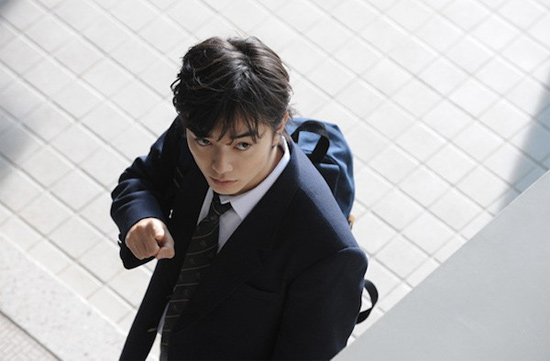 Performances are solid across the board, especially lead Shota Sometani (Himizu, Wolf Children), whose role involves him largely talking to his hand, and Eri Fukatsu (Bayside Shakedown), whose parasite-controlled villain Ryoko Tamiya is frightening but not entirely unsympathetic. Those looking forward to seeing much of fan favorite Tadanobu Asano (Lupin III) will have to wait until Part II, which is set to appear next year.

If Parasyte has a flaw, it’s probably the split into two parts. Diabolical movie producers all over the world have caught on to the fact they can make two films instead of one and double their profits, and Parasyte is the latest property to fall to this move. It’s not always unjustified: Rurouni Kenshin parts 2 and 3, released this year, covered a lot of story (though I think film 3 in particular could’ve lost a good 45 minutes), but Parasyte doesn’t seem to justify the same treatment. Clocking in at a full two hours, the film clunks along pretty slowly at times and probably could’ve been one three-odd-hour film.

That complaint aside, Parasyte delivers an interesting take on the manga and an entertaining flick in its own right. Here’s looking forward to the conclusion.