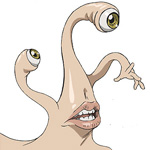 In addition to a pair of live-action movies, Hitoshi Iwaaki’s Parasyte manga is getting an anime adaptation this fall. The series is being directed by Kenichi Shimizu (Avengers Confidential: Black Widow & Punisher), with Shoji Yonemura (Kamen Rider Kabuto, Smile Precure) on series composition for the Madhouse production.

With Comiket going on in Japan this weekend, we have a nicely-timed first promo for the anime, which follows 17-year-old Shinichi Izumi, who deals with worm-like alien parasites that start infecting people’s brains. Nobunaga Shimazaki plays Shinichi, and Aya Hirano voices Migi, the parasite that attempts to infect our hero but ends up in his right hand instead thanks to his headphones getting in the way.

Here’s a first look at the anime: