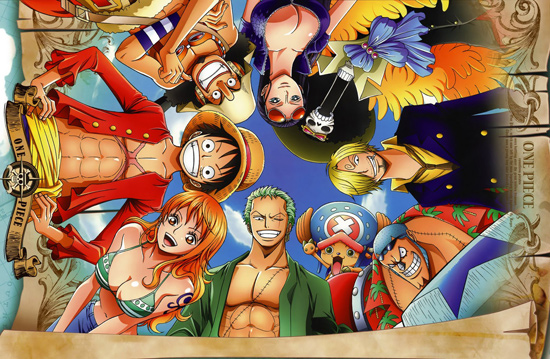 Our buddies over at Crunchyroll reported the other day that the video for the latest One Piece opening song, “Wake Up!” by AAA had been released. They noted that “Wake Up!” is the 17th opening song for the series – yes, 17th! – which got us thinking… wouldn’t it be interesting to chronicle ‘em all?

One Piece, which as of this writing is up to 649 episodes, started airing on October 20th, 1999, making it older than American Idol, the iPhone, and probably some of our younger readers. The first opening song to grace this 20th century One Piece was “We Are!” by Hiroshi Kitadani, currently a member of anime song supergroup JAM Project. At the time, Kitadani had just released his first solo album, and “We Are!” was one of his first big breaks. Kitadani would return to One Piece many years later with 15th opening song, “We Go!”

Chronicling One Piece theme songs means a trip back into what kind of music was popular at certain periods in Japan, and it definitely wouldn’t be the early 2000s without some Eurobeat. One Piece’s encounter with the genre came via “Believe” by Folder 5, a group on the Avex Trax record label (itself widely associated with Eurobeat).

“Hikari e” (“Towards The Light”), opening number three, was the first single by rock band The Babystars, who would go on to do the ending theme for Yakitate!! Japan, a show about baking bread.

“BON VOYAGE!,” which came into use starting with the series’ 169th episode, was performed by all-female group Bon-Bon Blanco, running until episode 207, when it was replaced by “Kokoro no Chizu” (“Map of the Heart”) by another all-female group confusingly named BOYSTYLE (not to be confused with the Swiss band BoyStyle, who are actually boys).

Looking at One Piece openings is also a fascinating tour through the J-pop production system. Take opening eight, “Crazy Rainbow,” sung by Tackey and Tsubasa, a male idol duo produced by über talent agency Johnny & Associates. Johnny & Associates, or Johnny’s for short, is Japan’s dominant male idol talent agency. Formed by the mysterious Johnny Kitazawa in 1962, Johnny’s has been the force behind virtually all of Japan’s major male idol groups, including SMAP, KAT-TUN and Sexy Zone.

Tackey and Tsubasa, who debuted in 2002 but had been in Johnny’s backing groups since they were 13 years old, also did the One Piece ending theme “Mirai Koukai.”

The ninth opening, “Jungle P,” was performed by pop band 5050 for 47 episodes before the introduction of the aforementioned “We Are!” remix by TVXQ.

In a One Piece first, TVXQ also provided the next opening theme, “Share the World,” which marked the series’ tenth anniversary. It also certainly marked the ever-evolving market for popular music in Japan: the “Korean wave,” a surge in the popularity of Korean popular that swept over Japan and the rest of Asia, was extremely nascent in 1999 when One Piece hit the airwaves, but by 2009, a Korean band doing the opening was nothing to bat an eye at.

The 12th opening, “Kaze wo Sagashite” (“Search for the Wind”) was sung by former Morning Musume idol Mari Yaguchi, while the 13th was by rock band The Rootless. Less upbeat than the usual One Piece opening, One Piece Wiki attributes this to the serious Marineford Arc unfolding at the time.

Up to now, most of the artists performing One Piece openings had been relative unknowns, often debuting or having their first hit their One Piece song, but opening 14 bucked that trend with “Fight Together,” a track from megastar Namie Amuro, showing the kind of cache One Piece has achieved as a part of the popular Japanese lexicon.

Amuro’s “Fight Together” was followed by opening number one’s Hiroshi Kitadani singing his second One Piece song, “We Go!” followed by “Hands Up!” by Kota Shinzato, bringing us back, finally, to AAA’s “Wake Up!,” the current theme.

One Piece has seen a lot of groups come and go (it’s outlasted almost all the bands who’ve done songs for it, in fact) and been host to almost fifteen years of J (and K) pop trends. Though obviously one animated show can’t represent the whole industry, going through One Piece’s openings one by one (hehe) is an interesting peek at what’s been going on in Japanese music. With no sign of the manga or anime finishing anytime soon, who’s to say what’s to come.