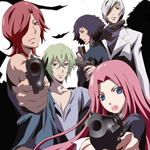 Strange+, the series of short anime episodes that adapt Verno Mikawa’s absurd detective gag manga of the same name, certainly earns its title. Love it or hate it, the show is getting ready to return in July, and the Seven production is being previewed in a brief promotional video.

The original manga has been serialized in Ichijinsha’s josei manga magazine Monthly Comic Zero Sum since 2002, and the first season of the anime is directed by Takashi Nishikawa, whose previous credits include animation director on an episode of Naruto Shippuden and key animation on the Detective Conan: Kid in Trap Island OVA, among others.

Season 2 sees character designer Hiroyuki Furukawa taking over as director, and you can take a quick peek below.