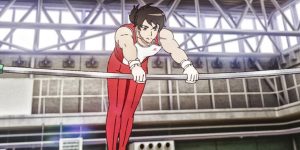 The new sports anime The Gymnastics Samurai will be simulcast by Funimation starting on October 10. The theme of the anime has caught the attention of Kohei Uchimura, a gymnast and 7-time Olympic medalist, who released a short video about it.

“Hello, everyone, I’m Kohei Uchimura,” he begins in English.

Switching to Japanese, he explains, “I am a professional gymnast, and I won two gold medals at the Rio Olympics, one in the individual all-around, and one as a team. In October 2020, an anime called The Gymnastics Samurai will start airing. Since it’s about gymnastics, I’m also paying close attention. I hope you’ll see the appeal of gymnastics through this anime. Please look forward to the new anime, The Gymnastics Samurai! Kohei Uchimura, signing off.”

He waves and finishes in English, “Bye-bye.”

So we know what he’ll be doing October 10. Is this an anime you’re interested in checking out?