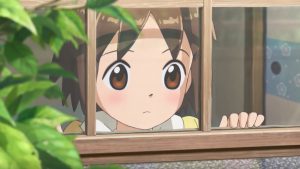 GKIDS has another limited theatrical release for an anime film on the way this April. The latest is Okko’s Inn, a 2018 movie known in Japan as Wakaokami wa Shogukasei!, directed by Kitarō Kōsaka and produced by MADHOUSE.

Based on the children’s books written by Hiroko Reijo and illustrated by Asami, the feature is coming to select U.S. theaters this April, and you can see the first official teaser trailer below.

After losing her parents in a car accident, Okko goes to live in the countryside with her grandmother, who runs a traditional Japanese inn built on top of an ancient spring said to have healing waters. While she goes about her chores and prepares to become the inn’s next caretaker, Okko discovers there are spirits who live there that only she can see – not scary ones, but welcoming ghosts who keep her company, play games and help her navigate her new environment. The inn’s motto is that it welcomes all and will reject none, and this is soon put to the test as a string of new guests challenge Okko’s ability to be a gracious host. But ultimately Okko discovers that dedicating herself to others becomes the key to taking care of herself.