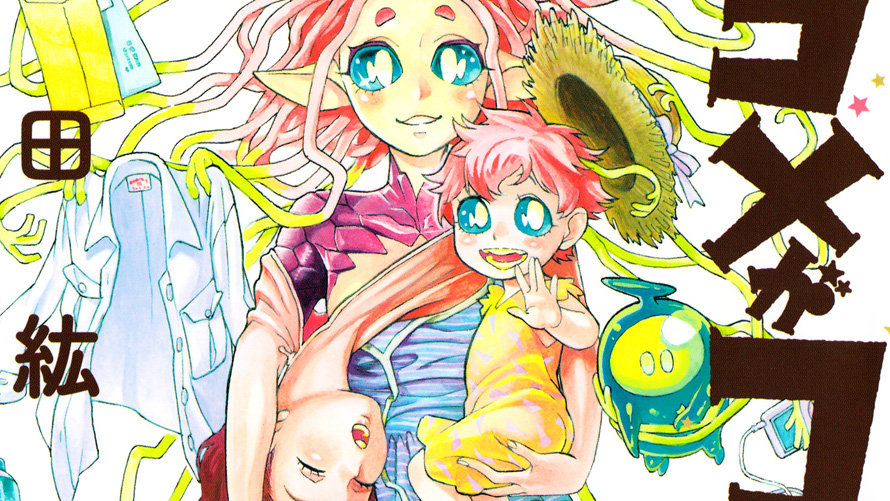 Nobuo, an affable young salaryman with hipster chin scruff, has a secret: his wife is a space alien whom he met when he was abducted by a UFO. Posing as an ordinary housewife, she wears a cute-faced human disguise to go outside but hangs around the apartment in her true form, which sports purple scales, prehensile Medusa-like hair, and eyes that are terrifyingly huge and sparkly even by manga standards. (Also, improbably, a human-looking female torso.) Together the two deal with in-laws and interlopers, go out on dates, raise their mixed-species baby, and constantly reaffirm their love.

Oh, My Sweet Alien! is even more fanservice-y than most “monster girl” manga, with the M rating allowing for page after page of casual nudity, raunchy gags, and drawings of the characters in well-lubricated positions, often innocent in context but clearly somebody’s fetish. But the story is a sweet, gentle romantic 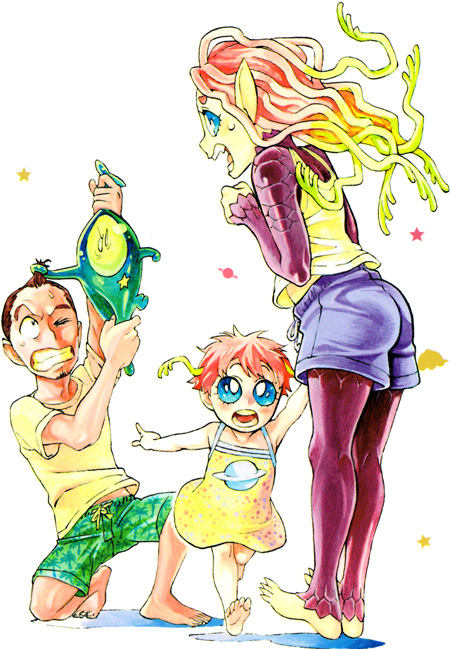 comedy told with more imagination and heart than the average cheesecake title. It’s a rare manga where the lead characters are in a happy, healthy adult relationship and genuinely seem to like each other. Chapter after chapter ends with husband and wife uniting to solve a problem, whether it’s kidnappers, seductive alien spies, or the possibility of coming out as an interplanetary couple.

Miyata passed away suddenly in 2015, at the age of 34, leaving only a handful of manga. His art is rounded and bouncy, as if the characters are rubber dolls, but with an appealing humanity and humor. It resembles the work of certain American artists working in a “manga style,” like Felipe Smith, more than it does other Japanese manga. (The alien wife, with her enormous eyes and neon pink hair, looks like a Western cartoonist’s parody of those wacky anime character designs.) Complete in one omnibus volume, Oh, My Sweet Alien! is a breezy, sexy read that’s much better than it needs to be. Recommended.

Trigger’s SSSS.GRIDMAN Anime on Display in New Promo
The Night is Short, Walk on Girl Hits US Theaters This August