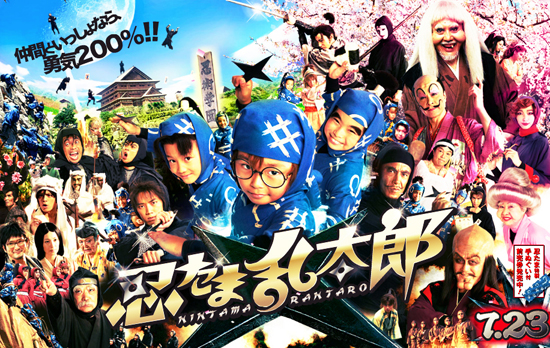 Hey, guys, what would happen if we got Takashi Miike—Japan’s all-purpose director of respectable genre masterworks like 13 Assassins and bizarre cult fare like Ichi the Killer—to do a kids’ movie? Well, we already found that out last year with his painstakingly faithful and frequently perverse Yatterman. What if, though, Miike directed something even younger-skewing than Yatterman? That’d be Ninja Kids!!!, an adaptation of the long, long-running (going on twenty years!) Nintama Rantarou, which premiered very recently at New York Asian Film Fest.

The premise is “boarding school for ninja.” Though the original manga/anime predates Harry Potter by a wide margin, it’s hard not to think about it when you see the bespectacled protagonist, whose function in the film is mostly to stare soulfully at the camera through those huge glasses with his mouth open just so. Of course, this is a comedy, so the kids are screw-up ninjas who get in trouble all the time. That’s about it for the premise, and indeed, the plot.

But Miike knows that nobody’s in the theater for silly stuff like a plot. This is about as lowbrow as it gets: watching the movie is like sticking your head in a book of four-panel gag manga for 90 minutes. Here’s how the flow of the film goes. A character is introduced, and the tremendous effort spent to make the actors look like the often grotesquely ugly manga characters (one character’s running gag is that his head is so heavy and strangely shaped that it throws him off balance) impresses the audience into laughter. Then there’s a joke; maybe somebody gets hit in the face or falls off a roof. And we repeat from there, except somewhere halfway through there’s a five-minute musical exposition scene.

Before the film, the fest organizers claimed that everything crazy inside of Miike’s madman brain that he’s had to suppress for straight movies like Assassins was unleashed upon the screen here, and though the film keeps its antics strictly PG, that assessment is likely accurate.

As expected, Miike revels in the childishness of the material—there is an elaborate, running gag about how grandmaster ninjas avoid stepping in dog poop. Ninja Kids!!! is indulgent, it’s stupid, and it’s much funnier than one would expect from this kind of fluffball. A favorite joke was the “explanation ninja”, who appears by tearing apart the green-screen that the actors are standing in to freeze the scene and explain ninja weapons and such. 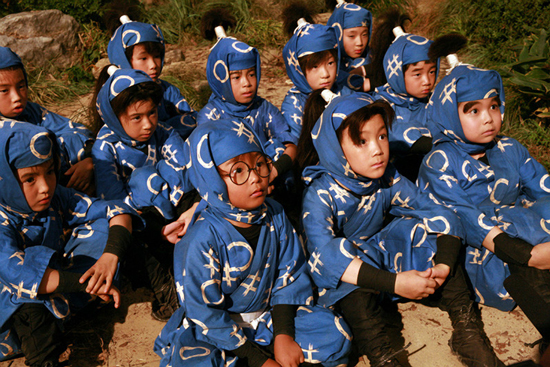 Around the middle, evil ninjas, even more bumbling than the good ninjas, appear and a ninja blood debt is settled with a foot race to the top of a mountain (but of course!). Don’t worry about it, though! Everything, even that brief moment of conflict, is just setup for more dumb jokes. And then it’s over, with the boy-band theme song Nintama Rantarou has used for twenty years playing over footage of actors on the set, completely pulling back the curtain on the heavy green-screening, the economy-budget sets, and the small mountain of makeup.

Naturally, the fest audience skewed a lot younger than it usually does, with many families of young kids. As an anomaly—the 20-something anime nerd with no kids—I’ll let the audience reaction sum up the film. The loudest and longest laughs came out of 20-something guys (my demographic). The toddlers seated at either side of me both repeatedly begged their parents to leave, starting at about halfway in (especially at that musical number). An older child in front of me, around 8, was hysterical at every sight gag. Let that be your age guide. If you don’t object to your kid seeing dog poop, they’ll have fun with this.