Notes From Nippon: Heroes Among Us 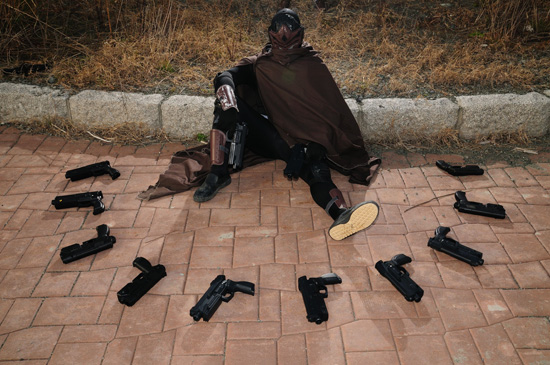 After a while, Japan starts becoming the equivalent of finding out that Santa doesn’t exist. There is no denying that the halls of Nakano Broadway are full of magic and wonder, and Harajuku has rows of lolitas strutting down in their platform boots if you go at the right times. That said, when you stay out of Tokyo and make your day-to-day living in Saitama, it’s hard to shake the notion that maybe, just maybe, you’re in a country that just happens to have people who live, eat, breathe, fall in love, and die. They just happen to speak a different language and you just happen to be illiterate and wondering what exactly that college degree went to. The otaku dreamland starts to fade into the desert of the real. 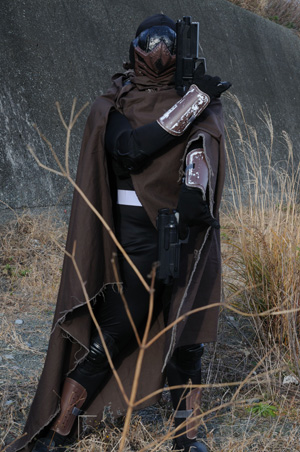 The story of how our first formal interview came from our first meeting is a long one. Through my brother-in-arms Mike Dent, I learned of his existence around Tokyo, where he allegedly patrols the streets of his quiet suburb ensuring that they stay quiet. Taking a train from Blade Runner-esque Shibuya to some station with an unmemorable name consisting of non-descript conbinis and disregarded shops, I started to wonder if somehow the train hadn’t looped back into Saitama by some freak wormhole.

In any case, it was so barren that there might as well have been a tumbleweed wafting and some guy playing harmonica. No immediate sign of anything resembling a tokusatsu superhero with double pistols and a brown cape. So, as any good journalist would do, I asked around. You’d imagine a real-life superhero would be an enigma that would illicit eleven different answers from ten people about his nature, but contrary to expectation, there was a cohesive picture painted about him: Public drunkenness usually followed by public urination; disruptive conduct; petty theft; unnecessary violence; womanizing; lechery; and, to quote a certain resident of the town, “a bad man.”

And that was according to someone who claimed to be rescued by him, mind you.

Fortunately, I also happened to find out that he would be making an appearance at a small festival in Odakyuu-Sagimihara in Kanagawa. It was here that I met him and his documentarian, Fumi Minamitsuji. Living up to his reputation, when I arrived at the festival it wasn’t hard to find the guy who was standing by the oden cart, flipping the bird at children passing by. While I braced for the worst, I found him to be quite approachable and willing to speak openly about his experiences. 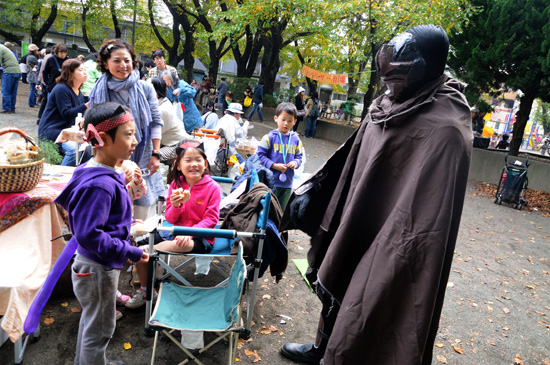 What brought him here?

“I gotta do some bullshit promotional work. Shaking hands with kids and old people. Stuff like that… I’m just doing it for the money. I mean, it doesn’t matter if you fight for justice or not, just gotta make a living y’know.”

Curious about that last part, I asked him how much does the average superhero make.

“Not enough. I rescued the owner of a pen company and as a reward, he paid me 8 million… in pens. I don’t even know how to friggin’ write!” Given that an eyewitness reported about him stealing the wallets and expensive shoes from his fallen foes, I figured it best to not follow that line of questioning any further. 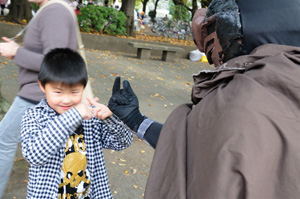 The conversation quickly moved on to more philosophical pursuits of the nature of evil. “Evil is the epitome of greed. Namely, rugrats and old fogies. Kids are always begging, ‘Buy me this, buy me that,’ and old jerks are always begging their families, ‘Buy me a new pillow, buy me new hair.’ They’re never happy with their lives.”  Old men and little kids were in no short supply at the festival and they mostly shared his resentment. His pelvis-thrusting antics in front of an old lady selling knick-knacks had lead to easily overheard comments—“How gross!” “What kind of a hero is he?”

Minamitsuji, the action director for Gothic and Lolita Psycho and by far Gun Caliber’s closest (only?) confidant and friend, didn’t have much to say in opposition to this. Looking around carefully to make sure he was out of earshot, he nervously admits, “Gun Caliber’s… a hero I guess. I’ve never actually seen him fight with any bad guys, though. Not that I’m saying that he’s a bad guy.” 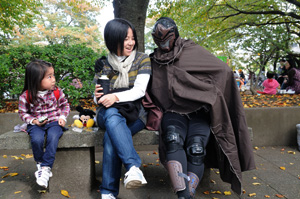 As the day dragged on and Gun Caliber started to hit on every girl within sight, the interplay between Minamitsuji and his subject was like a yin-and-yang tango. Well, if Yin was a frustrated film director, Yang was a costumed superhero and tango involved lots of drinking and middle fingers. Contrary to my expectations there was no fighting, let alone shooting, to be had that day. It was just a regular festival that happened to have the added ingredient of the guy in a cape ranting incoherently about being a “dark hero.”

While Gun Caliber’s brand of justice can be politely described as “anarchic,” I attained a sort of understanding through my observations. He was indeed a rude, womanizing lech, but he was far from malicious in his actions. Gun Caliber might well be a “bad man,” but Minamitsuji stated, “Yeah, he’s not a bad guy… I just wish that he had more common sense.”

Gun Caliber’s home on the web can be found at https://www.guncaliber.net.

Fernando Ramos is a Japan correspondent for Otaku USA, his homepage can be found at https://www.mroutside.com 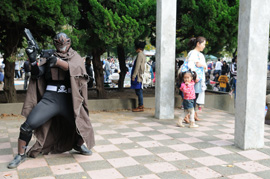 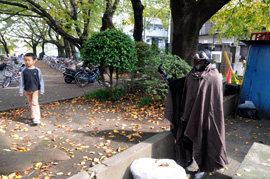 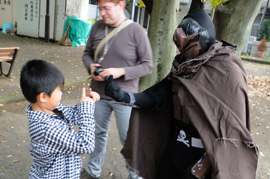 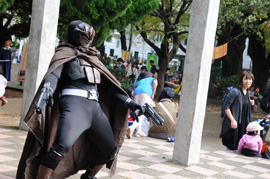 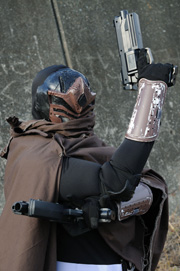 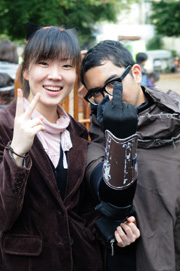