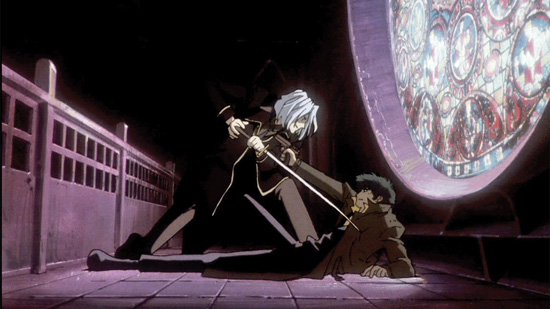 Hailed by its director Shinichiro Watanabe as a series that is a genre unto itself, Cowboy Bebop has enthralled millions of fans around the world. Debuting in 1997, the series rocked the world of anime with its impeccable pacing, imaginative and believable world, and well-defined main cast of flawed but lovable characters. What is it that continues to make Cowboy Bebop stand out among the ocean of anime titles that surround it? In this article, we’ll examine the facets of this critically acclaimed series to deconstruct what makes this a fan favorite almost two decades after its premiere.

In Cowboy Bebop’s universe, instead of a utopian futuristic paradise, like many sci-fi franchises portray, the solar system is factional and divided. The Earth itself is sparsely populated and has been rendered almost uninhabitable by an accident that has peppered tens of thousands of pieces of debris that occurred in 2021. 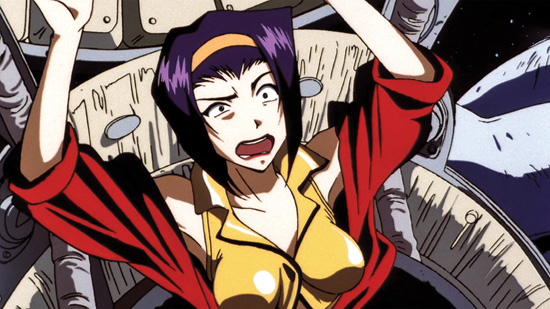 Fifty years later, when the series starts, this has led to a decentralization of humanity and its governments. There are large settlements, such as Mars and Ganymede, that have the semblance of civilization, but the majority of smaller outposts dotted about the extent of the solar system are bound only by their own rules and traditions. Though there is a solar system-wide law enforcement agency, ISSP (Inter-Solar System Police), it is spread thin and must be supplemented by groups of professional bounty hunters.

Enter our main characters: Spike, Jet, Faye, Ed, and Ein. These bounty hunters live on the fringes of society, only emerging when they have to take down a bounty head for a needed injection of woolong, or the currency unit of the Cowboy Bebop universe. Their spaceship, the Bebop, is as much of a character of the show as the group that inhabits it. It’s the main form of long-distance conveyance for our bounty hunters, and much of the series is spent on its various decks and in its various compartments. 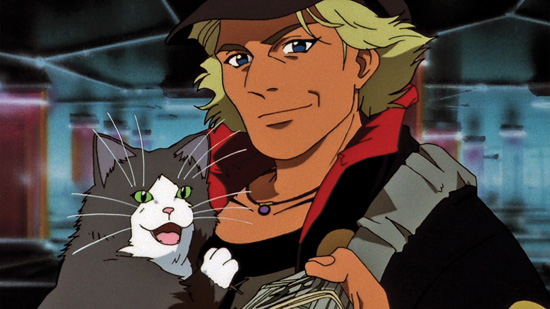 The sparsely populated solar system gives a definite impression of a frontier-esque setting. To enforce this feeling, our band of characters is composed of weirdos and loners, people who either don’t fit into society or don’t want to fit into society. Their penchant for living at the edge and running headlong into danger certainly paints an image not unlike that of a cowboy of the American West.
If you add these elements up, you’ll definitely see where Cowboy Bebop gets its reputation for a Wild West feel and with each settlement the Bebop visits seeming like a Tombstone or a Dodge City, fraught with weirdness and danger.

Flawed Characters in a Flawed World

Part of Cowboy Bebop’s appeal is the anti-hero nature of the cast. Each character has at least one major flaw that their story progression focuses on throughout the series, whether it be Spike’s lost love or his connection to the Red Dragon Syndicate; Jet’s former career in the ISSP; Faye’s issues with debt and her forgotten past; or Edward’s issues with being an orphan and a social outcast. Each of these characters is a product of the world they live in and part of what makes their issues compelling instead of contrived is because they are a natural consequence of the overall climate of the solar system of 2071. They are so easy to empathize with because they’re not heroes. They’re just regular folks (sort of) trying to make a living. 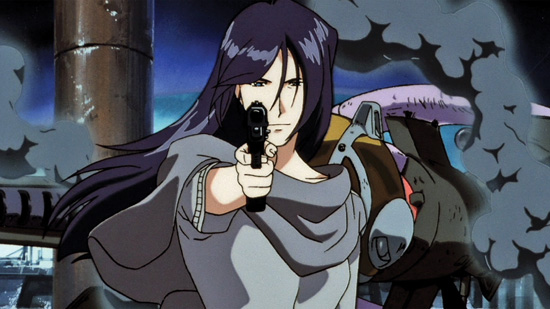 Unlike many anime series, Cowboy Bebop was planned from the beginning to span only 26 episodes with no companion manga in simultaneous print. This meant Cowboy Bebop didn’t have to make use of “filler” episodes, or anime based on manga typically used to create episodes that aren’t related to the main plot, or independent plot-based episodes to allow the manga to catch up before continuing the main story.

Instead, Cowboy Bebop doesn’t rely on the main story episode/side story episode configuration that most anime does. Episodes of Cowboy Bebop are more delineated by whether they’re a story that directly involves character development or a side story, which involves the development of characters outside of our main group of bounty hunters. Although an individual episode may have an “A/B” plot, one of the two plotlines is always dominant and each episode has a very poignant story to tell. This tight storytelling means the multiple threads of each character’s back story weave throughout the series until each character gets some sort of catharsis concerning their flaws and issues.

Although the series does leave some questions unanswered, it doesn’t leave many loose ends within its narrative. 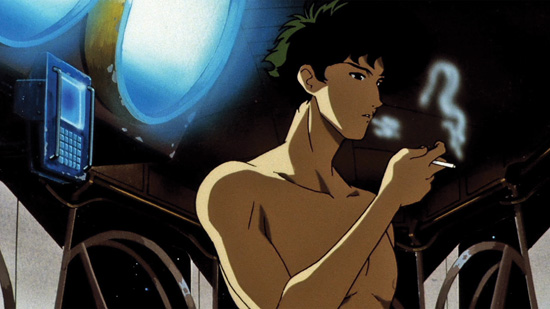 How The West Was Won

Unlike many manga/anime series, Cowboy Bebop is less reliant on Japanese tropes and instead draws material from Western works like Star Wars and Blade Runner. The mature art style and subject matter have seen the series gain a broader appeal than any of its contemporaries. One of the major barriers in the late 90s that kept anime from finding a broader audience in the West was the stigma that it was somehow weird or immature. Cowboy Bebop almost seems tailor-made to penetrate Western markets with its “wild west in space” concept and characters with a western aesthetic. For those watching in the west, there was no need to understand Japanese humor or social graces. You could just kick back and enjoy the ride.

Another factor in broad Western acceptance of the series was the portrayal of the world of Cowboy Bebop as being a blend of Asian mysticism and European style. This aesthetic, which originated in the novel Neuromancer and made further famous by Blade Runner and much later Firefly, blurred the line of preference for architecture and religious belief in the series. Instead, the universe of Cowboy Bebop seems as though its ties to the nations of Earth are largely blurred or eliminated, and this goes for ethnic ties as well. For example, Spike, who is obviously European, was a trusted member in the clearly Asian-inspired triad-like Syndicate. This stands in stark contrast to many Japanese works which show either exaggerated portrayals of Western culture or position Japanese culture as being superior to that of Western culture. This makes Cowboy Bebop a much less intimidating exercise in viewing for new fans to anime and although the results are almost subliminal, they made it and still make it a great introduction into the world of Japanese animation. 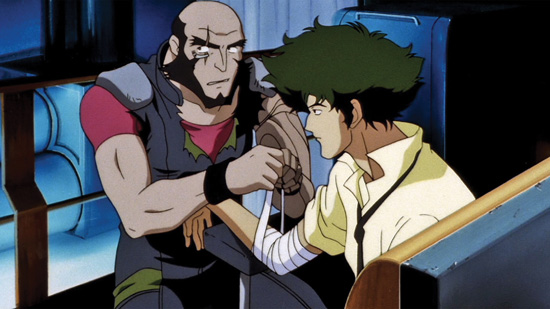 Nineteen years later, Cowboy Bebop feels just as vital and relevant as it was upon its release. Thousands of anime fans got their introduction to the artform from Spike, Jet, Faye, Ed, and Ein’s journey through the wild frontiers of mankind’s future in space. As we get closer to the date that the series takes place, the questions posed by the advanced tech, terrorism, and crime in an ever-growing society seem to align more and more with the examples we see in Bebop.

Although there are some who say Cowboy Bebop is more about loneliness or existentialism, I instead posit that it’s about a diverse group of individuals who somehow through all their differences in age, race, gender, or even species, can live together and make it work in a small space like the Bebop and how even though our flaws can cause us great pain, they can also be the thing that brings us together for a greater good. As we quickly approach the time in which the human race will reach into the inky black of space to forge a new frontier, I can only hope that some of us will live long enough to follow the example set by Cowboy Bebop and see some real space cowboys.

Cowboy Bebop is available from FUNimation and Crunchyroll. 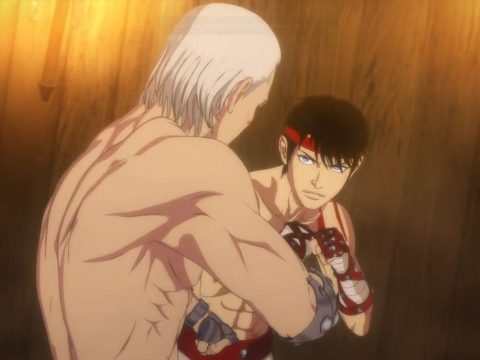