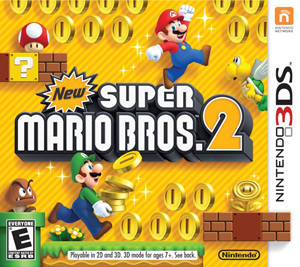 When New Super Mario Bros. first came out for Nintendo DS, the concept of having a brand new 2D Mario game was refreshing. While the quality of its aesthetic is up for debate, and not all the new ideas meshed together quite so well, it was fun to return to the Mushroom Kingdom as we originally saw it so many years ago. When New Super Mario Bros. Wii hit consoles, that fresh feeling dissipated, but it was still fun to play with friends to make their platforming experience slightly more miserable as a result.

However, now it’s 2012 and New Super Mario Bros. 2 comes off as the most ironically titled Nintendo game yet.

New Super Mario Bros. 2 is all about coins, but without this conceit one would be hard-pressed to differentiate it from the New games that preceded. Most of the worlds are all familiar, the graphics are identical; so what gives? Nintendo wants you to collect a million coins but there’s little reason to do so, and thus we’re thrust into one of the company’s most going through the motions releases ever. Before this becomes all doom and gloom, though, keep in mind that it’s still a solid game. As far as platformers go, NSMB2 is top tier. The controls are as tight as ever, it’s satisfying to discover hidden coins and alternate routes through stages, and a few of the throwbacks will bring a smile to your face no matter how hard you try to resist it. It’s just a shame there’s so little wonderment surrounding the festivities.

Let’s talk about lives, which at this point are nothing more than a dated formality. They’re the perfect example of how tradition is holding back the franchise, making the entire experience all reward and no risk. It’s kind of like giving kids gold stars for participation in school; it seems like a good idea but it just makes everyone grow soft and 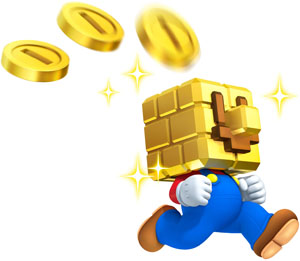 entitled. By the time I reached level 4-1 of NSMB2, I had 104 lives. When you nearly have enough 1-Ups in stock to fuel a Suikoden character roster, you’ve got a problem. It has nothing to do with individual skill level, either; everyone who plays will likely end up breaking into the triple digits at some point. Even when you run out, you just go back to the nearest save point, so why bother?

It’s a fundamental flaw in design that cheapens the game, and it’s more evident here than even Super Mario 3DS Land, which, for the record, was a brilliant game despite similar hand-holding drawbacks. Mario games used to be platformer training grounds—challenging enough in their own rights but forgiving enough to allow most any player to succeed through perseverance. The lack of challenge—even for those who are bound and determined to nab every star coin along the way—makes it seem like Mario is just running a routine errand through routine worlds with little enthusiasm. After a while, I found my own ways to get the most out of NSMB2, opting to speed-run through stages rather than plodding across platforms and digging for every single coin. (Of course, out of unshakable habit, I would eventually go back for those later.)

Coin Rush Mode mixes things up a bit, offering the most challenge out of the entire package. Players can choose different three-stage courses, each of which is comprised of a random assortment of levels from various worlds. The objective is to get as many coins as possible on one life during the run, and the clock is ticking. The typically lengthy time limit of each stage dwindles to just 100 starting ticks, so balancing speed and collecting time increasing items is key to survival. Coin Rush is a fun way to spend some time after completing the game proper, but it likely won’t hold everyone’s interest for too long unless there’s a particularly heated score battle going on amongst friends. 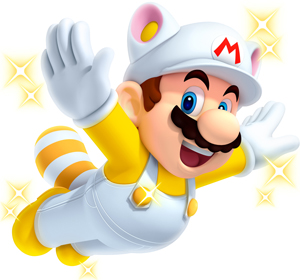 The ultimate disappointment about New Super Mario Bros. 2 is that it’s simply good. It’s a good game! It has plenty of fun moments, just none that will stick with you long after popping the cart out of the 3DS. A few of the later stages have glimmers of clever and fresh design, but when the recycling even extends to most of the fairly bland soundtrack, it’s hard to get excited about the future of the New franchise. Hopefully New Super Mario Bros. U proves this wrong.