Watching the first two New People Artist Series documentaries back to back is quite the experience. NEW PEOPLE in San Francisco showed both Traveling with Yoshitomo Nara and Yayoi Kusama I Love ME Tuesday night; for 2.5X the price of a normal ticket, attendees received admission plus a goodie bag including a copy of the DVD. Nara showed first at 6:30, and Kusama came right on the heels at 8:30—just enough time in between to grab some popcorn.

What’s crazy about watching them together is how completely different the artists are — Nara’s story is about coming out of his bubble, while Kusama sinks further into her bubble the whole time. Both artists accomplished great feats during the filming: Nara and graf presented the A to Z exhibit, a city of 26+ “little houses” which provided charming temporary homes to a huge number of his paintings, sketches, and sculptures; Kusama eventually finished her Love Forever project—50 huge canvasses she coated in intricate doodles of things like eyeballs, thorns, faces, and tight stripes. That said, the emotion at the end was not the same at all.

As Nara traveled around the world, finally ending up in Hirosaki to build the A to Z warehouse museum, you could tell he changed a lot and expanded his horizons. There were also a lot of personal, genuine conversations recorded giving insight into how his views of himself, his art, and other people have changed over the years, even commmenting at one point that he felt he had become an adult. The story arc feel is played up by Aoi Miyazaki’s narration, which, maybe it’s the obvious thing to say, almost seems as though it could be the voice of one of his mysterious staring girls.

Kusama, on the other hand, was completely self-absorbed the entire time and just not entirely there. It got to the point where she just didn’t feel like a reliable narrator, and since everyone surrounding her at her studio fulfills the purpose of agreeing with and supporting her (she was in her late ’70s during the time of filming and has since turned 80), you don’t feel like you’re getting the clearest picture of her life. They do present some parts of her background about the time she lived in the United States in the ’60s and early ’70s organizing events and participating in protests. It’s hard to tell from this movie if her mental state was ever truly ok, as she claims to have been experiencing depression and suicidal thoughts ever since she was a child, but the one constant is surely her obsession with making art, whether that includes polka dots (her best known trademark) or something else. The soundtracks for each movie mirror the feel really well. While Yayoi Kusama’s was mostly full of strange little accordion and music box-sounding tunes, for some reason I can almost believe that Yoshitomo Nara may have had a hand in choosing the Eastern Youth tracks (and others) they used, or at least, it wouldn’t surprise me if someone told me that. Sometimes the background was just the music of his studio, which I also really enjoyed. Watching him paint (and Kusama draw, for that matter) was one of the most interesting parts.

The DVDs don’t have any extras to speak of really (unless you want to speak of trailers for the other four artists in the series, yet to be released), but the movies stand perfectly on their own given the casual and personal documentary feel. To be honest, I was not really aware of either of these very current (and famous!) artists until seeing these films, although I did recognize Nara’s mean little children right away just from their general popularity. Mostly it’s just really exciting that the time is being taken to document and film contemporary artists now, while they are still alive and working. A History Channel retrospective in the year 2040 would have been way less engaging. Definitely looking forward to seeing the rest of the series! 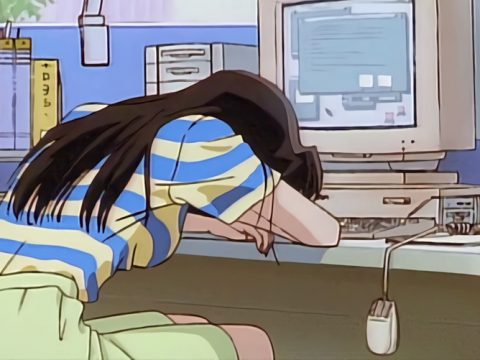 What Do An Anime Staffer’s Work Hours Really Look Like?