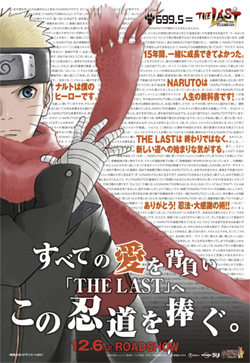 As we noted last week, for a manga that’s come to an end, there sure seems to be more new Naruto stuff than ever being announced these days.

The latest news, according to ANN, is that a new TV special is set to air December 4, just two days before the release of the new film The Last -Naruto The Movie-.

The special will focus on Hinata Hyuga’s sister, Hanabi, who is “the complete opposite of Hinata.” Both sisters will appear in the The Last.

Last week’s announcement centered around a new Naruto mini-series that will debut in spring of next year. A Naruto stage play will also open around that time.

Meanwhile, Stateside, Viz has announced their release of Naruto: Road to Ninja, the previous Naruto film, will be released on DVD and Blu-ray November 25.