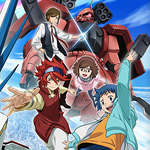 Following up on some longstanding rumors, the official website for the Gundam Build Fighters anime confirmed that there’s more on the way. A plan for a new series is in progress, and an image was posted saying, “GUNPLA BATTLE NEXT FIGHTERS STAND BY.”

There aren’t any more details at the moment, but fans of the recently-aired 25-episode series can rest content that the model kit battling action will continue. Here’s the image that popped up on the official site: