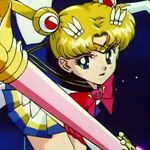 Viz Media pretty much blew the lid off Anime Central with the announcement that they licensed both the original Sailor Moon anime and the new Sailor Moon Crystal anime. The new series was previously announced to stream worldwide, with its online premiere set for July 5, and Viz will have more details to divulge on their own plans in the future.

As for the classic anime, Viz Media’s release will be uncut—including the original Japanese names, stories, and relationships—in its original 4:3 aspect ratio. The license covers streaming, digital, and home video rights for all 200 episodes, tie-in specials, and three feature films.

There’s also a new dub in the works, which will roll out later this year, but for now we have the English-subtitled version set to premiere Monday, May 20, on Neon Alley and Hulu. The stream will start with the first four anime episodes, with two additional episodes to premiere each following Monday. Half-season DVD/Blu-ray combo sets will start releasing this fall.

More Sailor Moon info—including the announcement of the new dub cast—is set to drop during “Sailor Moon Day” at Anime Expo. The fun kicks off there on July 5, and includes Viz panels and an attempt to gather the most Sailor Moon cosplayers in one place.