More Attack On Titan On The Way 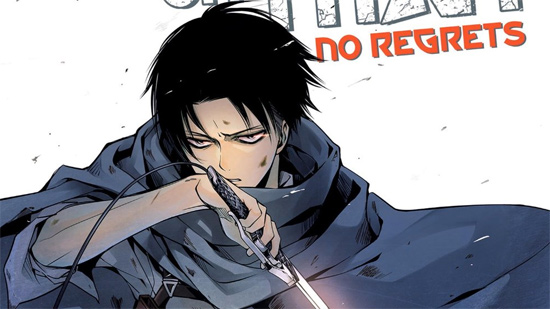 Good news for Attack on Titan fans: more anime is on the way. A lot more, in fact.

The catch: it’s a pretty short.

Still, Titan fans hungry for more probably won’t be complaining about the new two-episode series, entitled Attack on Titan: No Regrets. Based on a spinoff manga by writer Gun Snark and illustrator Hikaru Sugura, the No Regrets anime will come bundled on two DVDs released with the 15th and 16th volumes of the manga in December and April.

The creative staff and cast from the TV series are back, with animation by Wit Studio and Erwin and Levi portrayed by their original voice actors.

No Regrets is a prequel to the original series, which explores the origins of Levi and Erwin, explaining just how these two men became so, well, badass.

The announcement comes from a page in the 14th volume of Attack on Titan, out in Japan this week. No American release info for the OVA yet, but considering the popularity of Attack on Titan, we expect it’ll be heading over here before too long. The first volume of the manga is currently available in English via Kodansha. 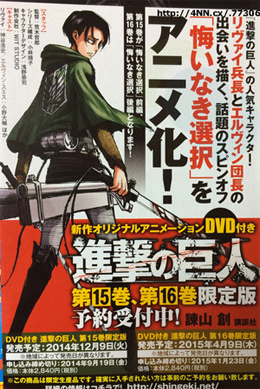 Secondly, a potentially bigger announcement, but one on which there is yet precious little info.

Attack on Titan producer George Wada was a guest at German anime convention Animagic in Bonn, where apparently the enthusiasm of the European fans overwhelmed him and he announced something not particularly surprising, but very exciting: the second season of Titan is in preproduction.

Wada didn’t reveal anything beyond that, but suffice to say, Titan fans felt a fair amount of cockle-warming at the news.

This new Attack on Titan anime is, of course, in addition to the already-announced compilation films, summarizing the plot of the first season, and the live-action adaptation. Last week it was confirmed the live-action version would stretch over two films. The cast was also announced; take a look at our story for more info.

Attack on Titan fans, please rate your level of excitement on a scale of 1 to “OMG.”