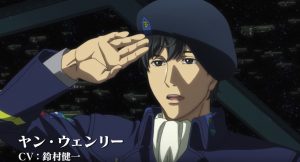 The Legend of the Galactic Heroes: Die Neue These anime is set to premiere this April, and both Crunchyroll and Funimation announced plans to stream it, with the latter setting it for a SimulDub. Ahead of the series’ April 3 debut in Japan, a new promo is here to introduce the cast.

Mamoru Miyano leads the Galactic Empire side of the voice cast as Reinhard von Lohengramm. Other talent in the series includes Yuichiro Umehara as Siegfried Kircheis, Junichi Suwabe as Paul von Oberstein, Daisuke Ono as Wolfgang Mittermeyer, Yuuki Kaji as Julian Mintz, and Yūichi Nakamura as Oskar von Reuenthal, among many others.