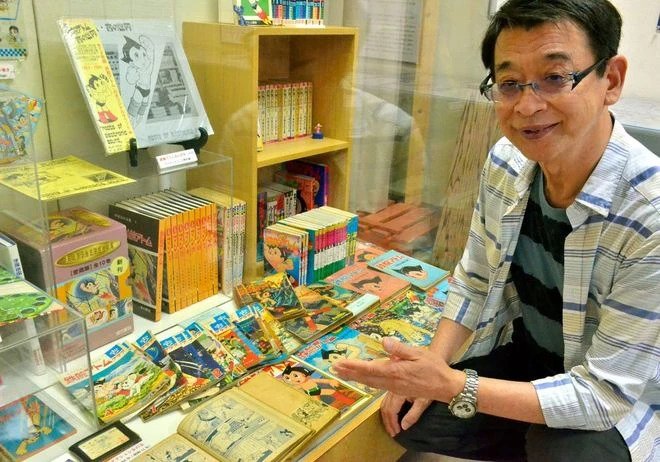 Many fans of anime and manga are also collectors, and one fan’s collection of Osamu Tezuka items is so big it’s actually being shown off at the Hashima Movie Museum in Hashima, Gifu Prefecture, Japan.

The collection consists of more than 1,000 Tezuka comics, plus movie posters and other Tezuka goodies. The museum wanted to have this on display because it coincides with the 70th anniversary of the Astro Boy (a.k.a. Mighty Atom) manga series.

But the museum doesn’t just have Astro Boy stuff. It also has Black Jack, The Jungle Emperor, Phoenix and more.

The massive collection came to the museum courtesy of Takanobu Tsuge, who remains a big Tezuka fan. He was in first grade when the Astro Boy anime came out in 1963. A few years later he joined an Astro Boy fan club. He had to pay money to take part, but he made sure he got it. His membership certificate and fan club booklets remain part of his collection and are in the museum display.

Once he got to college, he became serious about collecting manga and magazines.

“I satisfied my hunger [for Tezuka’s comic books] from my childhood when I grew older,” Tsuge remarked. “Had my parents bought those for me on a regular basis, I wouldn’t have kept them.”

Yasuo Imaida, the director at the Hashima Movie Museum, commented, “Mighty Atom was born in 2003 [in the manga]. The exhibition offers visitors the chance to learn that Tezuka had the foresight to envision the future 50 years from the early 1950s and how his stories deal with the theme of the dignity of life.”

The display will stick around until September 19. The general fee to get in is 300 yen (only about $2.00), and kids in middle school and younger are allowed in for free.