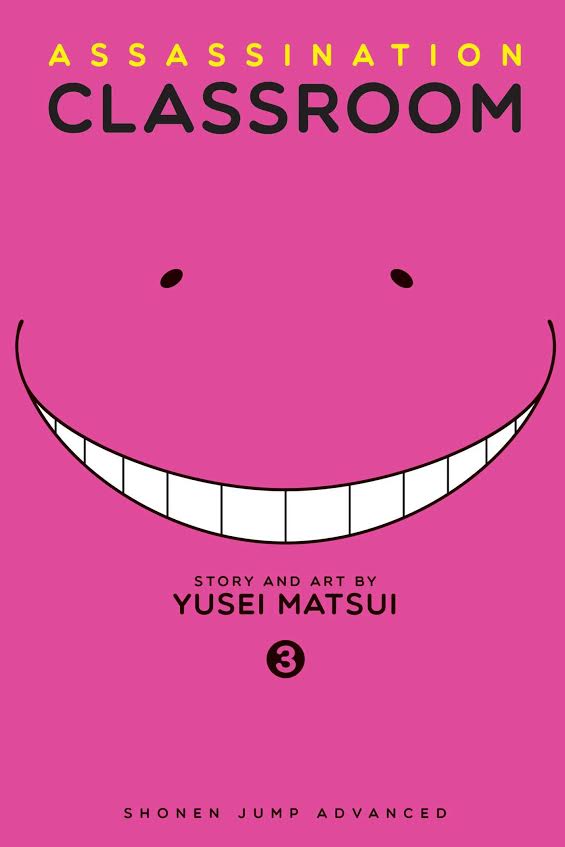 When I reviewed the first volume of Yusei Matsui’s Assassination Classroom manga, I wasn’t entirely convinced of how long it could riff on its premise. Now that we’re three volumes in, I think it’s clear Matsui has enough ideas to keep this going as long as any other popular Shonen Jump comedy, and it seems more confident than ever in doing so.

When volume three kicks off we’re smack dab in the middle of a school field trip that has gone predictably awry. Thankfully, the still-unkillable, octopus-limbed alien teacher Koro-sensei is prepared for every single outcome imaginable, as evidenced by the massive field guide he handed out to each of his students. With this indispensable tome in tow, members of Class 3-E are able to get the best of a gang of ne’erdowells that kidnapped Kayano and Kanzaki with the most cruel of intentions.

Other than the field trip and the start of a significant story beat for English teacher-slash-assassin Irina Jelavić—also known as Bitch-sensei, but referred to as Ms. Vitch in the Viz translation—the main addition to Assassination Classroom this time around is a new “transfer student” that’s technically not even alive. She looks like a giant human-sized iPod, and while she comes to be known as Ritsu after being reprogrammed by Koro-sensei to be more of an appealing student, she initially introduces herself as Autonomous Intelligence Fixed Artillery.

What you see is what you get as far as her assassination capabilities are concerned. Ritsu is loaded to the gills with guns, and as each day passes her chances of successfully killing Koro-sensei gradually increase. It’s now pretty obvious that one of the highlights of the series is the introduction of new characters, like a constantly-revolving door of transfer students.

Matsui has done a good job of keeping things interesting thus far, and the series’ charm still mostly hinges on how genuinely caring and, for the most part, cool and collected Koro-sensei can be. The human character designs aren’t anything special here, but Matsui knocked Koro-sensei out of the park, and that’s important. Assassination Classroom is funny and varied enough to keep up with, and I’m eager to see where the next few volumes take the story and how long it can stay on its toes.