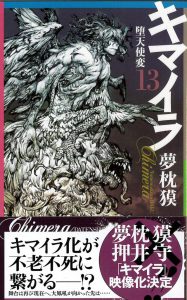 It’s been 10 years since Mamoru Oshii’s last anime film, Sky Crawlers. That’s far too long for fans of the legendary director, whose works include Urusei Yatsura, Patlabor and Ghost in the Shell.

Now it’s been announced that Oshii will be back in the director’s chair with an adaptation of Chimera, the novel series by Baku Yumemakura.

The novel series, which began in 1982, centers around a high schooler with a mythical beast called a chimera hidden inside himself.

Baku Yumemakura is one of Japan’s most celebrated authors of science fiction and adventure novels. His bibliography includes works like The Summit of the Gods, Onmyoji and Garoden.

Since Sky Crawlers, Oshii has directed a number of live-action projects, including Garm Wars: The Last Druid, the live-action Patlabor series and Toonami’s Sand Whale and Me.

But there’s nothing quite like a Mamoru Oshii anime film, and we here at OUSA are pretty pumped.