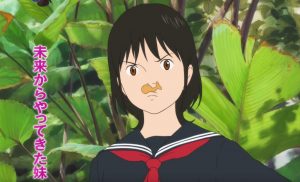 In addition to the previously announced North American screenings, GKIDS has some big plans for director Mamoru Hosoda’s latest. MIRAI, also known as Mirai no Mirai in Japan, is officially set to screen at this year’s Cannes Film Festival in the Directors’ Fortnight section.

GKIDS cites some of the previous films they screened in this section—including Ernest & Celestine, The Tale of The Princess Kaguya, and My Life as a Zucchini—all of which went on to become Best Animated Feature Academy Award nominees.

Mamoru Hosoda (The Boy and the Beast, Wolf Children, Summer Wars, The Girl Who Leapt Through Time) wrote and directed MIRAI, which was animated at Japan’s Studio Chizu. Here’s how GKIDS describes the feature:

MIRAI follows a young boy named Kun who feels forgotten by his family when his little sister Mirai arrives. Running away from home, Kun stumbles upon a magical garden that serves as time-travelling gateway where he encounters his mother as a little girl and has a series of adventures with his baby sister all grown up, opening up a new perspective on his world.

North American screenings are currently planned for this fall.